Accused were under scanner for weeks: Police

The action was called politically motivated and an attempt to stifle voices of dissent. 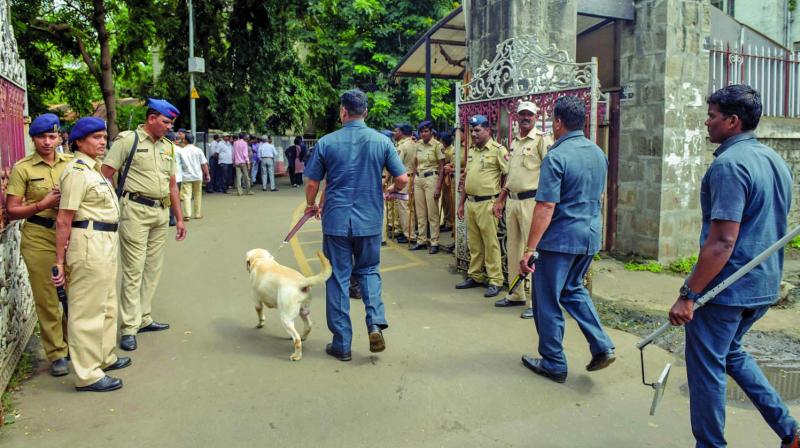 The dog squad enters Gate no. 4 of Pune session's court, on Wednesday where three of the activists are likely to be produced. (Photo: PTI)

Mumbai: A day after the crackdown and arrest of five activists in connection with the Bhima Koregaon violence in January, the Pune police said that the accused had been under their surveillance for weeks before their arrest. The investigators stated that the accused were allegedly looking to recruit people for their alleged naxal activities and that it was part of a larger conspiracy to allegedly aid the naxal movement.

The Pune police issued a statement on Wednesday stating that there was a watertight case against all the arrested activists, and that the police took action only after they gathered all evidence of their allegedly anti-national activities.

“We carried out searches at nine places and have seized laptops, SIM cards, pen drives and hard disks for scanning the data in them.

“Several incriminating documents, including the minutes of the meeting held by them supporting our investigation, has also been seized,” said Shirish Sardeshpande, deputy commissioner of police, Pune police.

Officials stated that this is part of a larger conspiracy to provide arms and other logistical support to the naxal movement in order to overthrow the government.

However, these claims have come under sharp criticism as there is no specific evidence, which has been shared by the police.

“Urban maoist is a term coined by the RSS, what does it actually mean. People working for the displaced and adivasis are called naxals by the government. Pune police had seized letters following the first set of arrests in June. Why haven’t they submitted them before the court yet,” said Susan Gonsalves, lawyer and wife of Vernon Gonsalves one of the five-arrested activist.

The civil society groups held a press conference on Wednesday to condemn what they called actions of reprisals against noted human rights activists and intellectuals. The action was called politically motivated and an attempt to stifle voices of dissent.