While a large workforce had been pressed into service to restore normalcy, the 10 am deadline was missed. 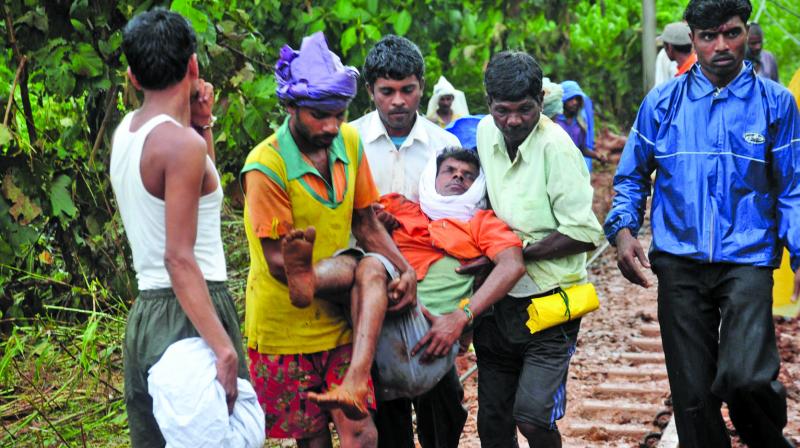 Mumbai: The heavy rains that lashed Mumbai and Thane on Tuesday morning caused huge problems for railway officials and workers while putting the derailed coaches of the Nagpur-Mumbai Duronto Express back on track at Asangaon. While a large workforce had been pressed into service to restore normalcy, the 10 am deadline was missed. Even as it took only two hours for the railways to rescue passengers after the train was derailed, incessant rains caused an intermittent delay and also left two workers injured.

Biren Singh, the motorman of the ill-fated train who spotted the landslide on time and applied emergency brakes, said, “It was really scary when I saw the landslide come hurtling towards the track. I tried stop the train as a result of which the rest of the compartments received a jerk.”

A.K. Singh. Central Railway (CR) PRO said, “We rescued 1,000 passengers from the train and the MSRDC helped us to arrange seven buses in which the passengers were ferried to Titwala and Kalyan station. All their bags and belongings were sent to Kalyan station in two coaches.”

One of the workers said, “Two of our colleagues suffered head injuries while removing the overhead wire. The person removing the wire from the top lost his grip and the wire came crashing on the heads of two workers standing below. They were immediately taken to the hospital.”

Sushil Gupta, a railway contractor, said, “The railway officials had asked for more than 500 workers but I could arrange for only 300 due to heavy rains and disrupted train services as workers from other stations could not come.”

He further added that work of clearing the tracks of mud and slime was proving to be tedious as the mud that was removed and put at the side of the tracks kept flowing back. “Even if we remove the train compartments from the tracks, it will be difficult to work on the tracks due to the mud,” he said.

While the labourers had been working since 8 am they couldn’t remove a train compartment till 2 pm. According to workers and some officials, the JCB took almost two hours to reach the spot.

A railway official said, “Our target is to complete all work by 10 am by Wednesday.  We have already re-railed two coaches and soon we will re-rail others, then we will fix the track and then the overhead wire.”

However, one of the villagers suffered an unfortunate loss due to the derailment after oil from the train spilled onto his crops. Suraj, the son of the farmer, said, “My father and mother are crying because our whole farm got destroyed. All the oil from train flowed down onto our farm. We don’t know what to do. If it gets destroyed completely, we will claim compensation from the railways.”