Trekkers take 21 hours to pull out 30 bodies from gorge

25 members of Sahyadri Group and 15 of Mahabaleshwar Group rappelled down the spot. 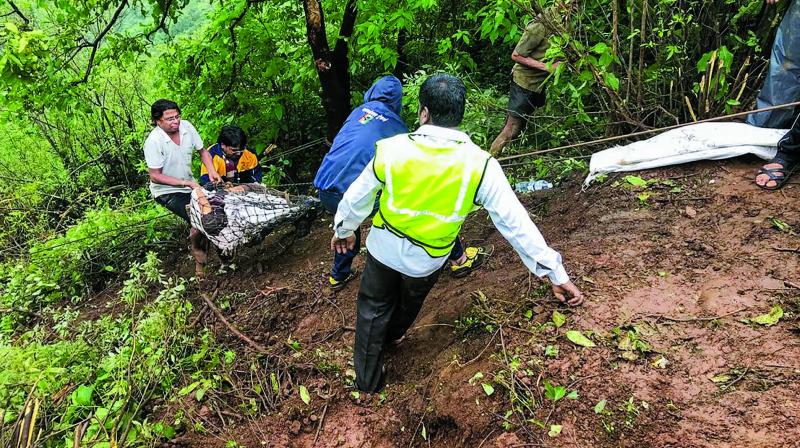 According to Mahad tehsildar Chandrasen Pawar, there were 31 passengers in the ill-fated bus, out of which, only one had a miraculous escape.

Mumbai: It took almost 21 hours to pull out the dead bodies from the 500-feet-deep gorge at Ambenali Ghat with the help of local trekkers, cutters and National Disaster Response Force (NDRF) personnel, even as it emerged that the total number of deceased in the tragedy stood at 30 and not 33 as earlier estimated by Dr Balasaheb Sawant Konkan Krishi Vidyapeeth (BSKKV), Dapoli, where they worked.

According to Mahad tehsildar Chandrasen Pawar, there were 31 passengers in the ill-fated bus, out of which, only one had a miraculous escape.

Raigad S.P. Anil Paraskar told The Asian Age that all bodies had been recovered at 11.30am. “So, we have stopped the bodies’ recovery work,” he said. He also said that an accidental death report had been registered and investigation would be carried out once the bodies had been handed over to their relatives.

Around 40 local trekkers from two groups — Sahyadri Trekkers’ Group and Mahabaleshwar Trekkers - played a key role in retrieving the bodies of the victims from inside the ravine. As the trekkers made their way down the gorge, 25 members of Sahyadri Group and 15 of Mahabaleshwar Group rappelled down the ravine towards the accident spot. Sanjay Parte, leader of the Sahyadri Group, said, “After crossing slippery pathways, it took us over an hour to reach the spot. We saw at least six to seven dead bodies were lying outside the vehicle, badly cut and entangled in the nearby bushes.”

Fog and rain were the major obstacles in rescue operations, Mr Pawar said, “We have sent a NDRF team from Pune and Thane along with local trekkers, with all the necessary rescue material. The BSKKV conveyed the wrong figures of 33 persons having boarded the ill-fated bus but actually it is 31.”