MKM claims no connection with people who met Fadnavis. 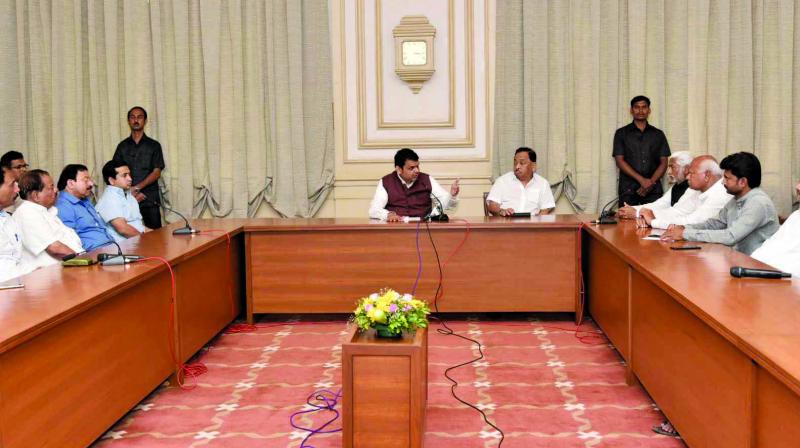 Chief minister Devendra Fadnavis appealed for maintenance of peace and assured that reservation would be granted.

Mumbai: Chief minister Devendra Fadnavis on Sunday met a group of agitators seeking Maratha reservation in Mumbai along with senior leader Narayan Rane, even as there is no clarity on the outfit to which the agitators belong. The CM appealed for maintenance of peace and assured the agitators that reservation would be granted to the community.

However, there is confusion regarding the group that the CM met as the Maratha Kranti Morcha (MKM), which is leading the statewide stir on quota, declared that it had no connection with the people who met Mr Fadnavis.

In a statement issued from Latur, where MKM’s state-level committee held a meeting on Sunday, the organisation reiterated that it will continue its agitation.

During the meeting with the protesters, Mr Fadnavis repeated all the points that he had made during the all-party group leaders’ meeting on Saturday.

“The state government is committed to reservation. All cases against peaceful Maratha protesters will be revoked. Other decisions like 50 per cent fees for college-going students of the Maratha community under `8 lakh annual income will be strictly followed,” he said.

During the meeting that was held Sunday afternoon, Mr Fadnavis, Narayan Rane, his son Nitesh Rane, and MLA Shyam Sawant – a close confidante of Narayan Rane, were all present.

Questions were raised about the name of participants in the Maratha stir. To which Narayan Rane said, “I am not bound to give you the names of the people. I was there, Nitesh Rane was there and a few representatives of various organisations were also there.” Meanwhile, members of the Maratha Kranti Morcha and the Sakal Maratha Samaj — an organisation looking into the legal issues of reservation, met in Latur on Sunday.

They denied that any of their members were present at the meeting with the CM and also said that they wouldn’t attend any such meet. “We do not know who was there. But it is sure that we will not go to meet the government. All the demands are well put before the government for a number of times and now, it is their time to act on them,” read a statement issued by the MKM.