The sources placed in the traffic department claimed that it is difficult to maintain physical books containing the challans. 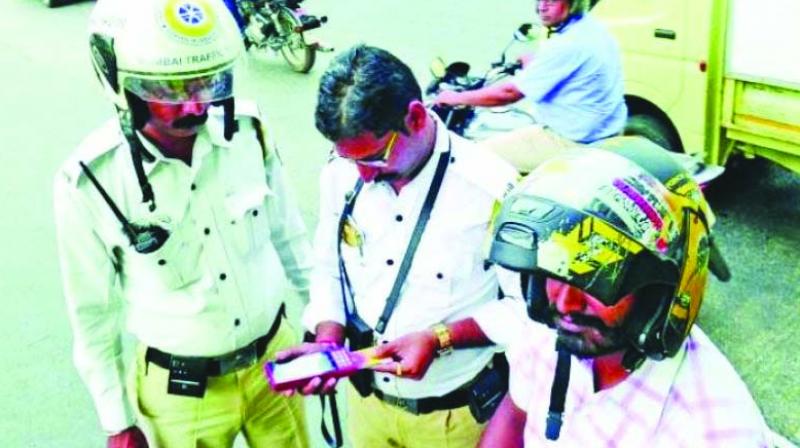 MUMBAI: As the two-month trial conducted at Tardeo’s Regional Transport Office (RTO) for using the e-challan machine reaches its last leg, a total of 36 RTO officials are now ready to issue e-challan to repeat offenders along with the traffic policemen, who were otherwise exclusively designated to issue e-challans.

A top official said that currently, if a challan is to be issued to a motorist, it is tedious to give a physical challan and then feed the details into the system, whereas with the integrated e-challan machines, it lowers the effort and increases the productivity.

The sources placed in the traffic department claimed that it is difficult to maintain physical books containing the challans issued to the repeat offenders, and keep a record of all the earlier unpaid challans issued by them.

Whereas the use of e-challan machines in the RTO will decrease the time taken to issue challans and will also cut down on the extra effort of later manually filling in the information in the computers.

Speaking about the new venture, a top traffic official said on the condition of anonymity, “The introduction of e-challan machines in RTO offices will be an added bonus. It will increase the productivity of at least two RTO officials, who are assigned to manually fill information in computers, per RTO across the state, which will eventually be beneficial to the entire department. The full-fledged integration with the RTO is expected to hit the floor by November this year.”

After the two-month trial is completed at the Tardeo RTO, it will imply a similar trial period in other RTOs of the city as well as all across the state.

The transport department has already planned to buy 1,300 handheld e-challan machines worth Rs 10 crore for RTO offices across the state, which will allow people to pay fine using debit and credit cards besides other modes.

“With the new system integrated with Vahan and Sarathi, other RTOs or traffic cops will come to know about the history of offences against against the vehicle or driver,” said a RTO officer.