The police said it would verify if she was part of the deadly off-line ‘Blue Whale’ dare challenge that is suspected to have taken a life in 2017. 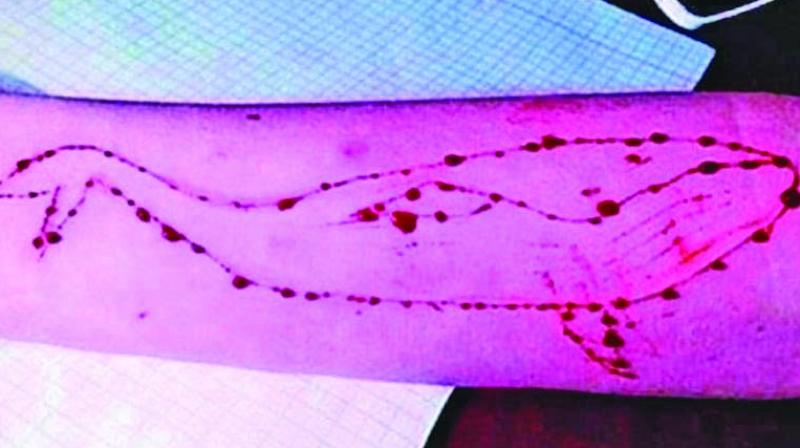 MUMBAI: A 14-year-old class nine student Harshika Maivanshi jumped to her death from the empty eighth floor of a Kandivali building on Thursday evening after she ignored requests from a few neighbours to not go ahead.

The police is yet to find out her motive, in the absence of a suicide note, and is unable to speak to the traumatised family. The police said it would verify if she was part of the deadly off-line ‘Blue Whale’ dare challenge that is suspected to have taken a life in 2017.

The girl jumped after waiting for barely two minutes, even as one neighbour ‘Sharma’, an engineer, who did not disclose his initial name, rushed to save her. Another neighbour recorded the incident and the video went viral.

The Samata Nagar police have registered an accidental death report (ADR), and are probing all angles.

The police said that since the family is traumatised  they would talk to them on Saturday, by when the last rites would have been performed.  Police sources said that Harshika was a student of Gundecha High School.

Police sources said that Harshika, a student of Gundecha High School, stayed with her parents and younger sister at Gundecha Valley of Flowers' Gardenia building. When the teenager returned from school on Thursday at 2.45 pm, she left her home at around 4.15 pm and went on the eighth floor of another building- Orchid, which is a refuge floor.

When residents from the opposite building spotted Harshika, they started screaming and alerted the watchm
an, housekeeping staff and others immediately by calling out to them. Everyone on the ground floor kept requesting her to go back to a safe place, and not jump. Three persons-one resident and two house keeping staff -rushed to the refuge floor of Orchid building, but by then Harshika had already jumped to her death. A resident from the opposite building recorded the entire incident on his mobile phone.

Raju Kasbe, senior police inspector of Samata Nagar police station, said, "We are investigating the case, and have spoken to a few eyewitnesses. However, considering the delicate period of mourning for the Maivanshi family, their statements will be recorded on Saturday."

Mr Kasbe added, "Meanwhile, we will scour social media accounts and get call data records of the deceased, which will shed some light on what triggered her to take the extreme step."

Mr Sharma, who had rushed to the refuge floor to save Harshika, said, "When I reached the fifth floor, I heard a thud sound in the lift, and still hoping that it wasn't Harshika, I went running to the refuge area only to find it empty.”

In May 2018, a 15-year-old teenager leapt off from the 14th floor of a Kandivali high-rise and had sent apology messages to a few of his school friends on WhatsApp minutes before taking the extreme step. Last year in July, 14-year-old Manpreet Singh jumped off the seventh floor of his Andheri residence as a part of the last task of the Blue Whale suicide game.

The video which captured the 14-year-old committing suicide on Thursday evening went viral on TV channels and social media websites shot by one of the neighbours and shed light on the inhuman tendency of a few persons wherein they would rather click pictures and videos of the incident rather than offering a helping hand or alerting others who could have averted the incident altogether. A city-based psychotherapist Dr Ali Gabrani said, "If the person is keen on shooting the incident on mobile, it shows that the person could be suffering from anti-social personality disorder. Such people gain a sadistic pleasure in watching such things, and commenting on it, instead of helping out."

A similar behaviour was seen after a plane crashed in Nashik, after which people thronged to take pictures with the crashed plane, showing complete indecency over the sensitive situation.