While the visibility was only 1.5 km, minimum of 5 km visibility is required. 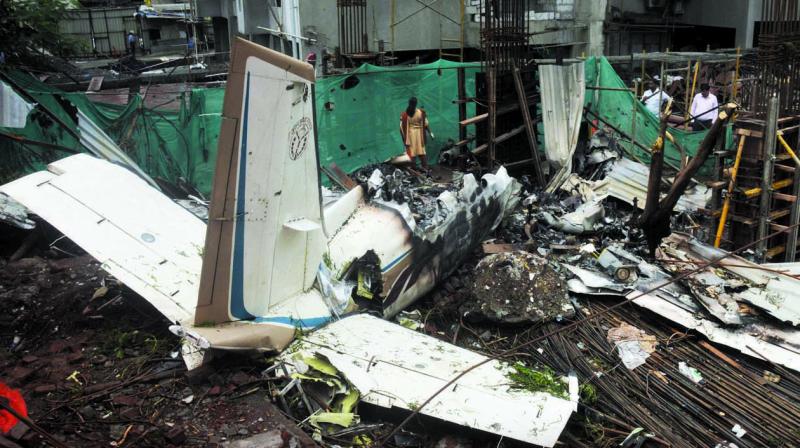 Juhu airport authorities are denying that the aircraft was supposed to land at the Santacruz airport.

Mumbai: A day after a chartered aircraft crashed in Ghatkopar killing five persons, it has emerged that the visibility was low due to cloudy sky and rain on Thursday and questions are being raised about the conduct of the test-sortie then. While the visibility was only 1.5 km, a minimum visibility of five km was required, said aviation experts. The Air traffic control (ATC) meanwhile has clarified that there was no lapse on its part.

The aircraft was following the circuit landing and had no intentions to land at the Santacruz airport, revealed Juhu airport director. It is also to be noted that the newly installed landing system at Chhatrapati Shivaji International Airport (CSIA) was also a part in navigating the aircraft. However, according to Juhu airport officials, there were no glitches from the ATC side.

“There are three observations about yesterday’s crash, firstly how did they allow a test flight while it was raining? For a test flight there should be minimum visibility of five km and the weather should be clear,” said Vipul Saxena, an Aviation expert and former air force pilot. Mr Saxena further added, “The test flight shouldn’t have been conducted where the aircraft is passing through crowded area especially during the peak hours.”  Prabhat Zuberi, husband of deceased co-pilot Marya Zuberi, had alleged that aircraft was ordered to be flown despite unsuitable weather conditions.

Meanwhile, the Juhu airport authorities are denying that the aircraft was supposed to land at the Santacruz airport and stated that circuit landing was planned for the aircraft. “There was no planning to land it on  the airport, a round circuit was decided wherein it had to follow the pathway and was expected to come back to Juhu. In this path, the Instrumental Landing System (ILS) was also involved but there were no glitches from ATC,” said A.K. Verma, Juhu Airport Director.