INS Betwa, which tipped over, is undocked smoothly

INS Betwa is currently alongside for her refit work, according to the Navy. 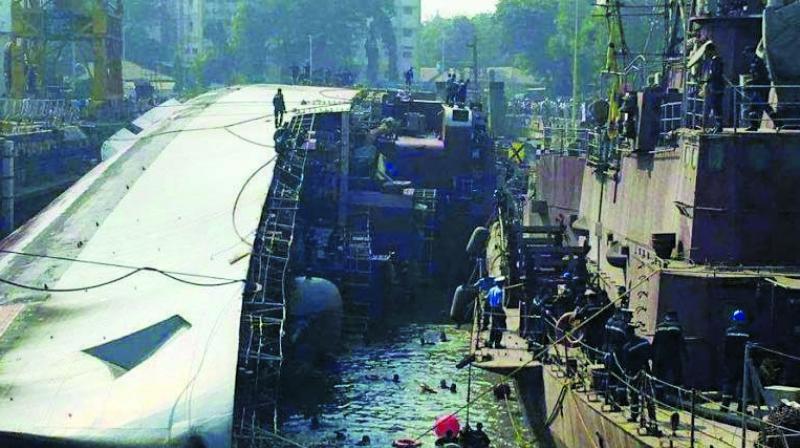 The INS Betwa when it had tipped over while being undocked at the Naval Dockyard in December 2016.

Mumbai: The Indian Navy’s guided missile frigate INS Betwa, which had tipped over while being undocked at the Naval Dockyard in Mumbai in December last year, has now been undocked smoothly, Navy officials said on Thursday. INS Betwa is currently alongside for her refit work, according to the Navy.

The undocking of INS Betwa was planned on June 22 this year as part of her ongoing refit. Prior to undocking, all preparations to ensure stability of the ship during undocking had been undertaken and she was provided adequate margin of stability.

During flooding of the dry dock, a list of up to seven to eight degrees was observe,d which was promptly corrected. However, the ship could not be undocked due to a leakage in the dock gate of the dry dock and subsequent unfavourable tide.

Thereafter, undocking was undertaken on June 27 as the tide was suitable.

Earlier on December 5 last year, during the process of undocking, the 4,000 tonne, 126-metre frontline warship had slipped from its dock blocks and tilted, killing two personnel and injuring another 15.

At the time, the Navy described the accident as “unprecedented and sad”. A court of inquiry was ordered and damages are still being assessed.

Commissioned into the Navy on July 7, 2004, INS Betwa was the first Indian warship to successfully integrate Indian-made systems with foreign ones.

The frigate is armed with two Sea King helicopters, Israeli Barak and Russian Klub missiles, apart from a 76mm gun and anti-submarine torpedoes among other weapon systems. INS Betwa is a frigate of the Brahmaputra class, built by Garden Reach Shipbuilders of Kolkata.

Named after the Betwa river, the frigate has been indigenously designed and built with the capability to operate at extended ranges, with speeds up to 30 knots.