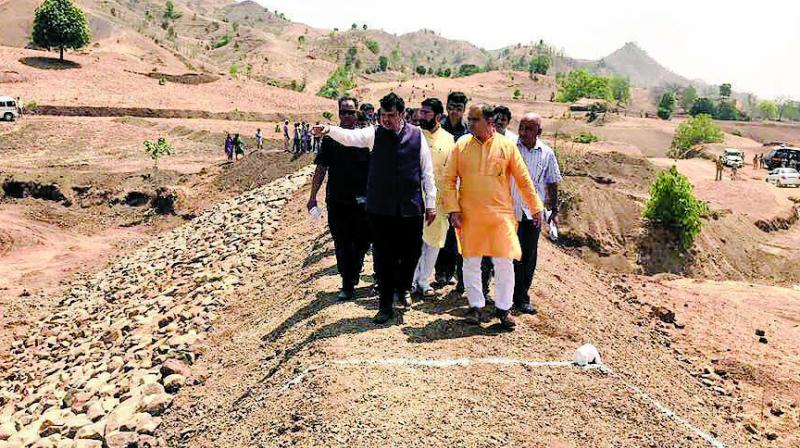 Chief minister Devendra Fadnavis at the site of one of the places where Jalyukta Shivar was set up.

Mumbai: Veteran social activist H.M. Desarda on Friday will meet and brief the expert committee on Jalyukta Shivar, a pet project of chief minister Devendra Fadnavis, in the backdrop of criticism that some of its implementation is “unscientific”. Desarda and other experts have raised objections over implementation of the scheme, calling it “unscientific”. Mr Desarda will meet the expert committee of former chief secretary Johny Joseph in Mumbai.

Jalyukta Shivar is a micro irrigation scheme pushed by the CM. Mr Fadnavis recently claimed that the project was highly successful as the number of water tankers had gone down drastically this year as compared to previous years.

The Maharashtra assembly even passed a resolution congratulating Mr Fadnavis for implementing the scheme. Yet, water and irrigation experts have raised voices against implementation of the scheme. Mr Desarda hails from Osmanabad district of Marathwada region where claims of success of the scheme have been made by the government. According to Mr Desarda though, the scheme is killing riverbeds as well as sources of water in adjoining regions. Mr Desarda even petitioned in Bombay high court for preventing the government from implementing the scheme. While raising other issues in court, Mr Desarda said, “Arbitrary implementation of the Jalyukta Shivar scheme is leading to destruction. Moreover, the government hasn’t prepared a master plan to create a drought-free state by providing planned budgetary allocation.”