All 3 accused in police custody

A sessions Court remanded all three accused in police custody till May 31. 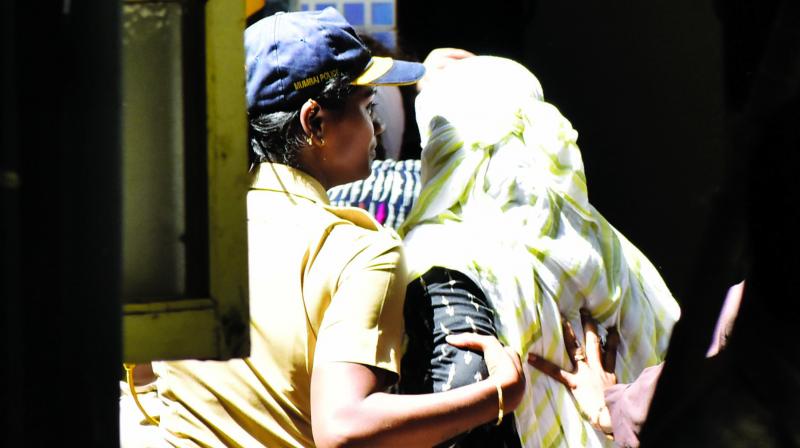 Three doctors accused of abetting Dr Payal Tadvi’s suicide were produced at a sessions court on Wednesday. —Debasish Dey 26 year old, Dr Payal Tadvi, who worked as a gynaecologist committed suicide on May 22 after humiliated by her seniors because she belongs to a scheduled tribe. (Photo: Debasish Dey)

Mumbai: A sessions court on Wednesday remanded three doctors of Nair Hospital, arrested for allegedly abetting the suicide of a junior colleague, Payal Tadvi, to police custody for three days. Payal’s mother claimed before the court that it is a case of murder as there were bruises on her daughter’s back.

The court accepted the argument made by the police that the custody of the three accused — Bhakti Mehere, Hema Ahuja and Ankita Khandelwal — was required to ascertain if the victim left a suicide note and whether it was misplaced or destroyed by the accused.

The three doctors were arrested after their 26-year-old junior colleague Dr Payal Tadvi at B.Y.L. Nair Hospital allegedly committed suicide by hanging herself at her hostel room last Wednesday.

Chief public prosecutor Jaising Desai, while seeking remand of the trio had contended before the additional Sessions judge R.M. Sadrani that the probe is in its preliminary stage and the police wants the custody of the accused to ascertain if the victim left any suicide note and if the accused destroyed or misplaced it.

Advocate Desai on behalf of Agripada police also argued that while the investigating officer has seized the mobile phones of the accused he, however, needed more time to recover the WhatsApp messages exchanged with the victim.

The police claimed that the victim's body had a few injury marks which needed to be probed further.

The postmortem report was awaited, they said. While Mehere was arrested after initial interrogation, Hema Ahuja and Ankita Khandelwal were nabbed in the early hours on Wednesday, a police officer said.

The police have invoked relevant sections of IPC, Maharashtra Prohibition of Ragging Act, 1999 and the SC/ST (Prevention of Atrocities) Act. Based on Tadvi’s mother Abeda’s statement in the FIR the police has claimed that the trio continuously harassed her and also passed casteist passing casteist slurs at her.

Advocate Nitin Satpute appearing on behalf of Abeda Tadvi, claimed before the court that it is a case of murder because some bruises were found on her body. He also demanded that the accused should be booked under section 302 (murder) of IPC.

Meanwhile, advocate Abad Ponda appearing on behalf of the accused claimed that the arrested doctors were not aware of Payal’s caste and neither sections of abetment to suicide, nor ragging or Atrocities Act is applicable.

However, observing that the police need adequate opportunity to investigate the matter the judge remanded all the three doctors to police custody till May 31.

The defence in the Dr Payal Tadvi suicide case claimed before the court that Dr Tadvi in her WhatsApp chat had told her mother not to use the word “adivasi” as nobody in her college was aware that she was from the reserved category, and hence, there was no way that the accused doctors could have targeted her over caste.

He also highlighted the chats showing that the accused doctors were unhappy with Dr Tadvi's performance as a doctor and had threatened to complain about her to their seniors.

The accused doctors’ lawyer, advocate Abad Ponda, while opposing the application of the police seeking custody of doctors Bhakti Mehare, Hema Ahuja and Ankita Khandelwal, stressed that as per the Supreme Court Judge, a person could not be charged with abetment to suicide until there was a “mens rea” (intention) on the part of the accused for wanting that/those person/persons dead and there was no intention in this case.

Meanwhile, another lawyer of the accused, Sandeep Bali, argued before the court that the victim was married to a doctor, but instead of staying with him, she was staying in a hostel and hence, there might be a family issues that could have led her to take the extreme step of killing herself.

It was also pointed out to the court that the room in which Dr Tadvi committed suicide was found locked from the inside so there was no possibility of her murder.

“We are doctors. We save lives. We don't take lives,” said advocate Ponda on behalf of the accused.

The arrested doctors had noticed that Dr Tadvi was not working up to the desired standards and hence, pulled her up. There was no intention to harm her.