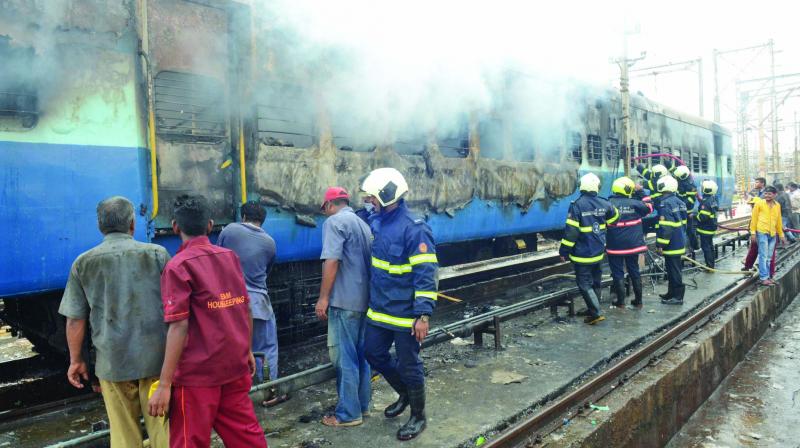 MUMBAI: A fire broke out inside a spare coach at the Chhatrapati Shivaji Maharaj Terminus (CSMT) yard on Tuesday afternoon.

The blaze also spread to an AC coach of the CSMT Gadag Express (Solapur Express) that was standing near it.

A fire brigade team arrived at the spot and brought the fire under control within 25 minutes. The Central Railway (CR), Mumbai Division, has ordered an inquiry into the cause of the fire, which led to the delay of four outstation trains.

The sleeper coach was charred, while the exterior of an AC coach belonging to the Solapur Express sustained some damage. The railway staff acted promptly and was seen manually pushing the coaches of the Gadag Express away to prevent further damage.

According to the CR, they have received information about the fire at 2.50 pm and immediately switched off the overhead electricity wires (OHE) for safety.

“As the OHE was off, the operation of the outstation express trains was also stopped. The OHE was powered on at 4.20 pm leading to four outstation trains being delayed. The Konark Express was delayed by one and a half hours, the Kanyakumari Express by 30 minutes, Nandigram Express, 25 minutes and the CSMT-Pune Pragati Express by 10 minutes,” said a CR official.

Senior deputy general manager of CR, who is also holding additional charge of divisional railway manager (DRM) of the Mumbai division, Sanjay Kumar Pankaj, said, “A high level inquiry of ‘J’ grade officers has been ordered into the incident to find out whether the fire was caused by miscreants or if it was an internal issue which lead to the
blaze in the coach.

A forensic team has been called in to probe the incident.”

Mr Pankaj added, “The fire was controlled within 25 minutes.”

According to a senior railway officer, the doors of the coach were locked so it is surprising how a fire broke out inside the coach.