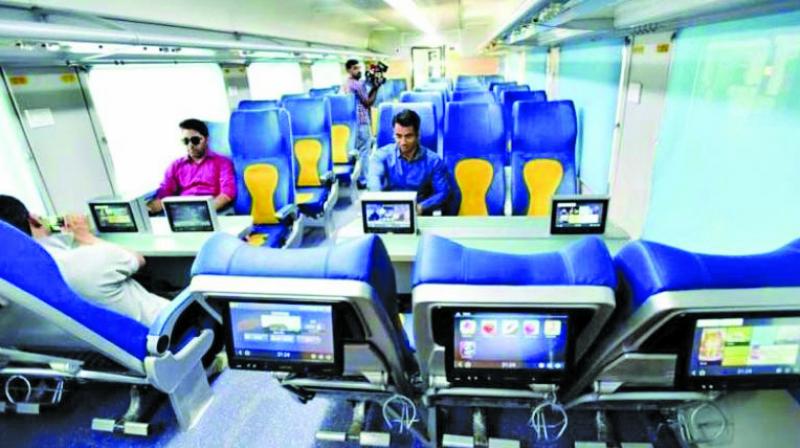 The Mumbai-Goa Tejas Express was flagged off by railway minister Suresh Prabhu from CST on May 22.

Mumbai: It’s not just headphones, but passengers of India’s first semi-luxury train Tejas Express have taken away even handwash and food trays from the train. Now, after a review meeting held on Monday, the railways has decided to replace all branded items with their cheaper alternatives.

An official said, “Some of the food trays have been vandalised and have gone missing as well so there is a thought that we will bring in the same item, but which will be more economical.” The official further added, “The issue is not severe but because Tejas has gained so much popularity in the media there was a separate discussion on it. If it was any other train this would not even be discussed, the cheaper alternatives would have been just provided.” The Mumbai-Goa Tejas Express was flagged off on May 22.

On the other hand, Central Railway (CR) divisional railway manager Ravindra Goyal denied that the issue was discussed. “No, this was not a part of the discussion at all, we took a review of the Tejas and there are small upgradations that will be introduced after a week of running the train,” he said.

“We will be increasing the volume level of the alarm installed near the door when the train will be departing from a station after some passengers told us that if they are standing outside the train on the platform, they cannot hear the alarm indicating the automatic doors are to be shut.” But sources from the railways confirmed that the issue was discussed in the review meeting.

Meanwhile, the Indian Railway Catering & Tourism Corporation (IRCTC) has come up with a facility to improve the ‘Tejas experience’ by making its catering staff wear Goan Haitian-look shirts while serving food. The items that will be served in these shirts will be Kothambir Vadi, dabeli, croissants, muffin and shrikhand etc.