Those Worli fishermen who earlier called for a boycott of the polls, maintained that many fishermen did not go to cast their vote. 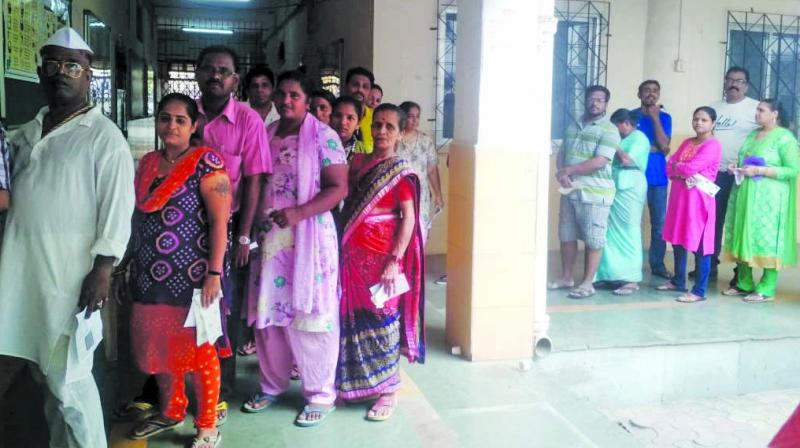 Residents line up to cast their votes in Worli-Koliwada.

Mumbai: Despite calls for a boycott by some fishermen organisations, an average 48 per cent voting was recorded in Worli Koliwada.

The fishermen of Worli-Koliwada had earlier stated that they would boycott the Lok Sabha elections on grounds that upcoming projects like the coastal road would impact their livelihood.

Deenanath Harishchan-dra Takkar (79), who is a paralytic patient and came to vote with his family, said that he had come from Thane to vote here as he had been a Koliwada resident earlier.

“Politicians have failed to address the kolis of Mumbai. Nobody is talking about the benefits to fishermen. I have voted for the party which earlier worked for the fishermen,” he said.

Those Worli fishermen who earlier called for a boycott of the polls, maintained that many fishermen did not go to cast their vote.

“While young fishermen decided to boycott the elections, certain groups felt they should vote against the parties that have come up with the coastal road project,” said Marshal Koli, a fisherman from Worli.

“We approached all the political parties to help us in the matter. We knocked on the doors of our MLA and pleaded with the BMC. We even conveyed our grievances to the chief minister, but no one helped us. We are on the verge of losing our livelihoods,” said Vijay Patil, another fisherman who boycotted the election.

According to the fishing community, there are more than 2,000 fishermen, fish vendors, and women fish-sellers in Worli.