The Big Bazaar, which caught fire, is located on the ground floor, Era house, opposite Shiv Palace, Mogul lane in Matunga West. 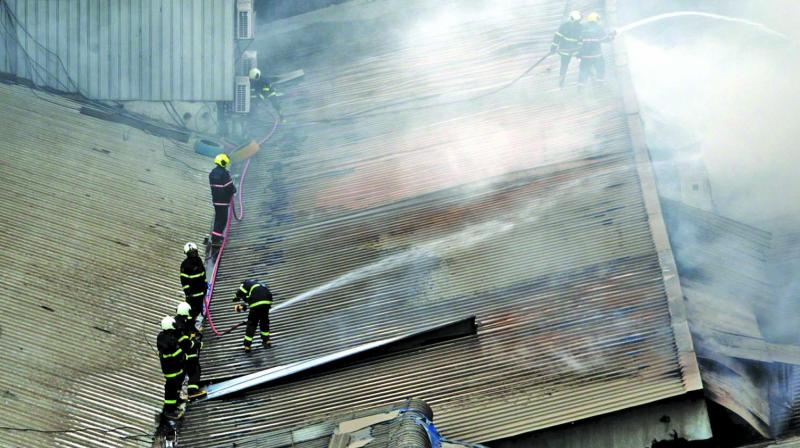 Mumbai: The Big Bazaar at Matunga caught major fire on Monday evening. The fire call was reported at 5.12 pm and seeing its density, the Mumbai Fire brigade (MFB) declared a level 4 i.e. highest fire level, at 7.32 pm. A total 12 fire engines, nine jumbo tankers, a quick response vehicle and three ambulances were rushed to the spot. However, no one was trapped or injured in the incident. The area was filled with dense smoke and firemen found it difficult to douse the fire due to huge explosions.

The Big Bazaar, which caught fire, is located on the ground floor, Era house, opposite Shiv Palace, Mogul lane in Matunga West. The building is a ground-plus-one storeyed structure and the fire broke out at Big Bazar’s ground floor’s loft.

“Prima facie, the extended loft was used illegally and the godown was totally filled with various articles. The fire flared due to two to three explosions, due to which there were difficulties in fire fighting operations. The fire was confined to the entire loft of the ground floor structure of the Big Bazaar shopping center. The fire spread to an area of about 20,000 sq feet and there was dense smoke”, informed chief fire officer, P.S. Rahangdale.

Although the shop was open Monday, it fortunately did not have any rush due to election voting day. “The Brihanmumbai Municipal Corporation (BMC) and MFB will be initiating action against the owner of Big Bazaar and the owner of the mill where the shopping centre is located,” said Mr Rahangdale.

The MFB has demolished the compound wall between Big Bazaar and the Palm House society to get access to Big Bazaar’s extended compound. Till the time of going to press, the fire had not been extinguished and firefighting was on with five water jets and breathing apparatus during operations. The adjacent buildings were evacuated for safety purpose.

At around 10.55 pm the fire was brought under control but the fire fighting operation is still on.