The NIA arrested Bhatkal, wanted in over 40 terror cases, from the Indo-Nepal border, in 2013. 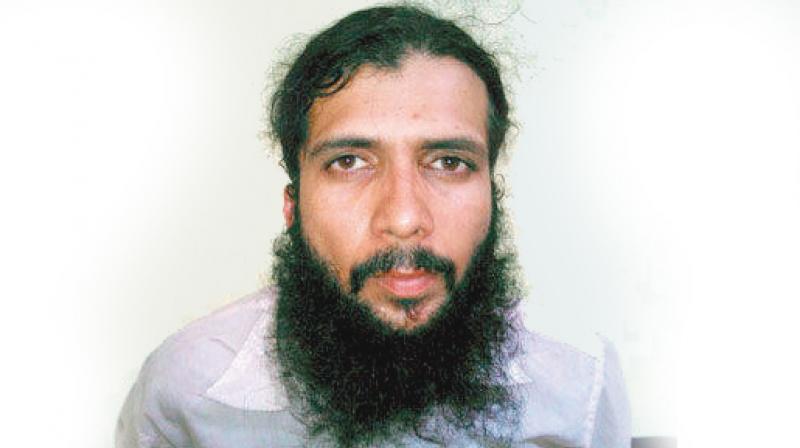 Mumbai: The Pune police has filed a charge sheet in the 2010 German Bakery blast case against terrorist Yasin Bhatkal, one of the founders of the outfit Indian Mujaheedin. The police produced Bhatkal alias Mohammed Ahmed Siddibappa before the court amid tight security Monday. The explosion killed 17 people and left 64 others injured in the blast at German Bakery, in Koregaon Park.

The charges were framed under the provisions of the Unlawful Activities (Prevention) Act, Explosives Act and the Indian Penal Code, said special prosecutor Ujjwala Pawar. Bhatkal was earlier convicted in the 2013 Hyderabad twin blasts’ case and awarded death penalty by a special National Investigation Agency (NIA) court in July 2018.

“Bhatkal was brought to Pune from Delhi's Tihar jail Monday for producing him before the additional sessions Judge K.D. Vadane. This was the first time since his arrest that Bhatkal had been brought to the Pune court,” said an officer of Pune police.

His court appearance came in the backdrop of the Delhi police’s application, seeking a video conferencing for him citing security reasons for bringing him to Pune in person. The said request was however opposed by Zahir Khan Pathan, Bhatkal's lawyer. The grounds laid by Pathan stated that Bhatkal must be present during the trial.

“It is the duty of the state to provide security... He (Bhatkal) can be lodged here at Yerawada Central Jail till the trial ends,” Pathan said, adding that he would file his submission on the issue on May 15.

The NIA arrested Bhatkal, wanted in over 40 terror cases, from the Indo-Nepal border, in 2013.