Egyptian likely to be shifted on Monday or Tuesday; Tests being done on Eman. 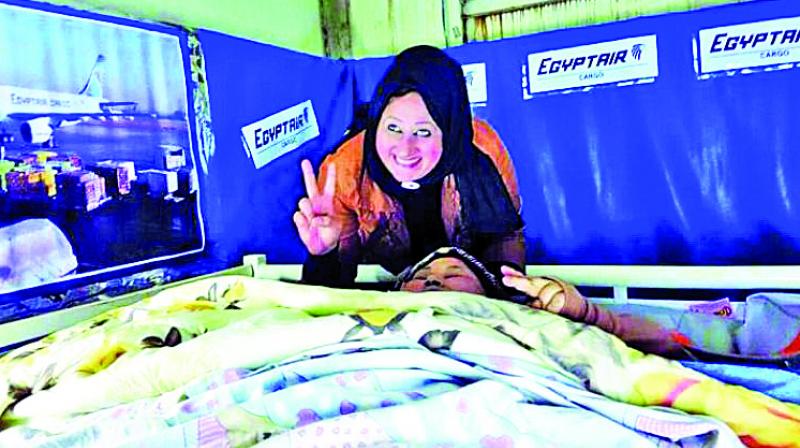 Mumbai: Privately-run Saifee Hospital has started the procedure for moving Egyptian national Eman Ahmed, once said to be the world’s heaviest woman, from Mumbai to Abu Dhabi for treatment. Doctors at Saifee have already initiated the required tests, including blood, lipid profile and others ahead of the patient’s transfer. Sources within the hospital said Ms Ahmed (36) would be moved out by Monday or Tuesday.

The hospital has said that unlike her arrival, her departure will be in a proper ambulance as she is not as heavy as she was when admitted.

Saifee Hospital is waiting for the assessment reports of Ms Ahmed from the four doctors and three management officials of Abu Dhabi-based group VPS Healthcare, who came on Wednesday to crosscheck Ms Ahmed’s health reports.

VPS Healthcare is the group that owns the Burjeel Hospital that Eman will be shifted to, in Abu Dhabi.

Eman’s sister Shaimaa Selim (32) has alleged that the doctors treating Eman have made “false claims” about her actual weight loss and “complete recovery”. Talking to The Asian Age, Ms Selim said, “ I am taking my sister to Abu Dhabi, because doctors there have promised to make Eman walk. Even Dr (Mufazzal) Lakdawala had promised the same, but he didn’t fulfil it and is now even denying that he ever said so.”

However, Dr Lakdawala has refuted the allegations, and said he had promised that Ms Ahmed would be able to sit and her weight would be reduced, which he has fulfilled. Dr Lakdawala, in a veiled reference to the Ms Selim’s allegations, said “We believed Shaimaa when she approached us and we measured Eman’s weight on March 2, it was 378 kg. My promise was of weight reduction and making her sit, which has been fulfilled from my end. I cannot do much regarding her seizures problems as it is a neurological disorder.”

“She had suffered a paralytic attack in Egypt, which caused her to lose mobility in her right hand and legs, she is unable to move them too. After strenuous efforts from our physiotherapist, she started moving her limbs. Is this not progress?” asked Dr.Lakdawala.