The building was redeveloped ten years ago but is yet to get an occupation certificate. 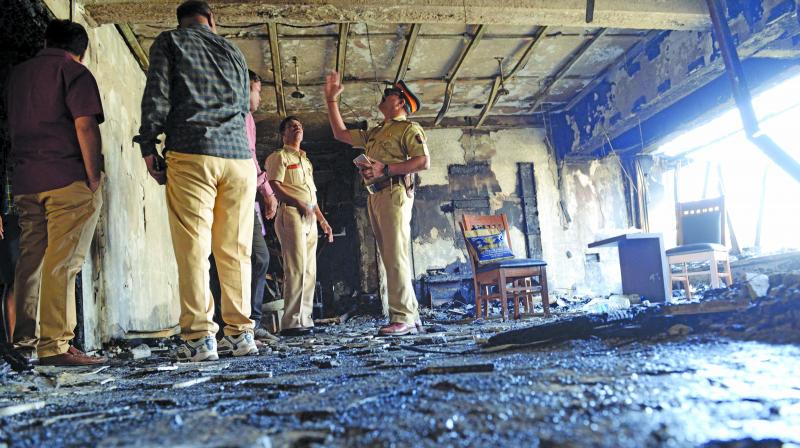 Cops inspect the gutted flat on the 11th floor of the Sargam Housing Society on Friday. (Photo: Rajesh Jadhav)

Mumbai: Residents of the Tilak Nagar building in which a blaze broke out on Thursday, claiming five lives, had given the developer a notice to complete the fire compliance process only a week ago, revealed Sandeep Joshi, a survivor who lost his parents in the fire, on Friday.

A committee of residents also claimed that the chief fire officer had been approached for a fire no-objection certificate (NOC) for a year, but the department was inactive. Incidentally, the building, Sargam, was redeveloped around 10 years ago but is yet to get an occupation certificate (OC).

“We residents had formed a committee to follow up on the pending compliances, just a week back the committee had sent a notice to the developer to complete incomplete work in the building, which includes the fire compliance. However, he did not reply,” said Mr Joshi. He added, “We had also sent a letter to chief fire officer (CFO) of the civic fire department, and the department has even acknowledged that our society lacks fire compliance. It has been a year, and they did not act upon it.” Joshi’s parents, Bhalchandra Joshi (72) and Suman Joshi (83), were among four senior citizens who lost their lives in the fire.

The Asian Age tried contacting CFO of the civic fire department, but he remained unav-ailable for comment.

The high-rise was initially a ground-plus-two-storey structure, and it was redeveloped under the Maharashtra Housing and Area Development Authority’s (Mhada) 33/5 scheme. According to officials from the housing authority, people started taking possession four years back. “The building does not have an OC, and the developer did not apply to Mhada for it,” said a senior Mhada official.

The fire broke out around 7.50 pm on Thursday and its cause is yet to be ascertained. Residents claim the fire originated from a Christmas tree in one of the apartments.