The injured persons were given first aid at Mhasavat rural hospital and transferred to be admitted at Nandurbar civil hospital. 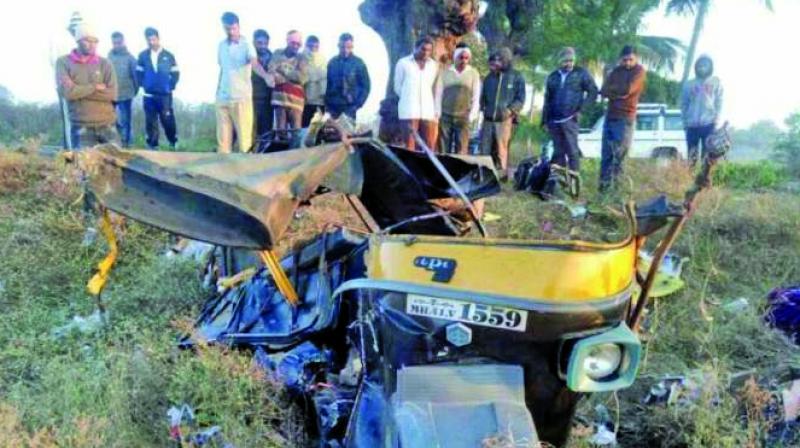 One of the autos that dashed into a truck.

Nashik: In an accident that occurred in Nashik, seven persons were killed when an unidentified truck dashed an auto in Shemli village off the Malegaon-Satana Road. The second accident of the day occurred in Nandurbar, when a truck and an auto collided in Shahada tehsil of Nandurbar district, killing five persons and injuring 11 others.

In the first incident in Nashik, the auto bearing the registration number of MH 41-V-1559 was going towards Malegaon from Satana when the mishap occurred..

All the deceased persons are reported to be toy sellers in village markets. They were coming from the Satana weekly fair. The bodies have been taken to Satana Rural hospital.

The Nandurbar accident  which is the second one, occurred in Amoda village, on Shahada-Dhadgaon road at 7 am on Thursday. Sources said that the auto no MH 39 D 895 carrying labourers, dashed against a truck.

All of them were residents of Talvadi village in Shahada tehsil of Nandurbar. The injured persons were given first aid at Mhasavat rural hospital and transferred to be admitted at Nandurbar civil hospital.