Machines have also been lowered down at Vidya Nagari in Kalina, Azad Maidan near Chhatrapati Shivaji Terminus and Pali Ground in Marol Naka. 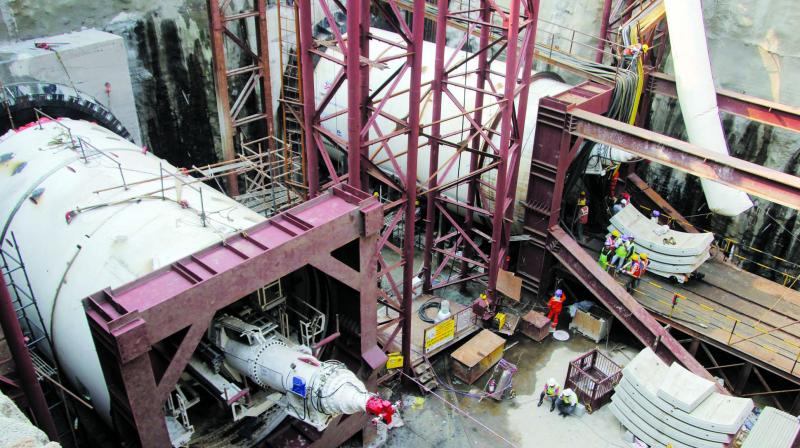 The first TBM was lowered down at the Naya Nagar launching shaft in Mahim.

Mumbai: Amid controversies and oppositions, the Mumbai Metro Rail Corporation (MMRC) completed the piling and excavation work for the Metro-3 (Colaba-Bandra-SEEPZ) corridor this year, and tunneling work was started by early November. In the beginning of the year, the MMRC placed an order for 17 tunnel boring machines (TBM) to execute the tunneling work of the corridor. Of these, five have arrived in the city. The first TBM was lowered down at the Naya Nagar launching shaft in Mahim in September. It took nearly 45 days to assemble the entire machine, which was lowered down on in three separate parts. According to the

MMRC, this TBM has completed 50 metres. The machine is expected to come out at Dadar by September 2018.

Machines have also been lowered down at Vidya Nagari in Kalina, Azad Maidan near Chhatrapati Shivaji Terminus and Pali Ground in Marol Naka. The tunneling work is being conducted 25 metres below the earth's surface, and the machine can cover a distance of approximately 12 metres per day. In the coming year, more such tunneling work can be expected. According to Ashwini Bhide, managing director, MMRC, all TBMs will reemerge by the end of 2019.

The TBM weighs around 700-800 tonnes with a diameter of 6.4 metres, the 100-metre-long machine will help in building a tunnel of finish size of 5.8 metre. The 33.5-km-long underground corridor will be made operational by December 2021.