Says he didn’t break law when ‘searching for wild cat’ with gun. 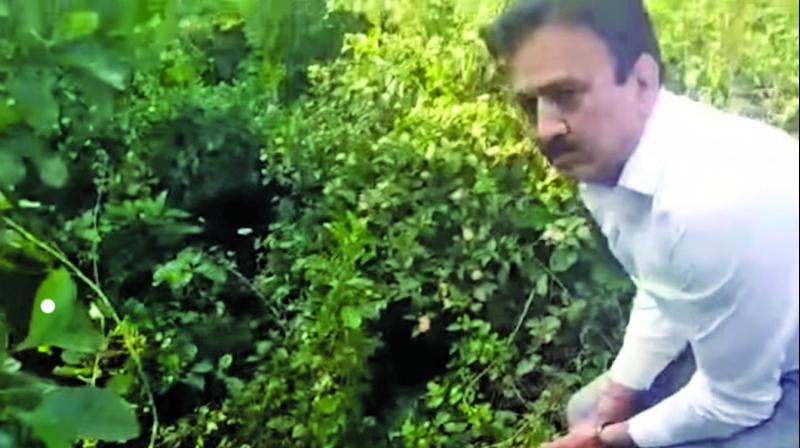 A video grab of a gun-toting Girish Mahajan.

Nashik/Mumbai: After a clip of state water resources minister Girish Mahajan chasing a man-eater leopard in Jalgaon with a gun went viral, he defended himself on Tuesday by clarifying that he was trying to protect the villagers of Warkheda in Chalisgaon tehsil.

Opposition leaders, however, have said that the minister has flouted the Forest (Conservation) Act by using the gun for hunting when it had been given to him for personal safety.

Meanwhile, the maneater menace continued to haunt Chalisgaon tehsil, after it claimed its sixth victim early on Tuesday. This is the third fatal leopard attack in Warkheda village and the sixth in Chalisgaon. Mr Mahajan hails from Jalgaon.

Asked if the incident amounted to any violation as per laws for using licensed firearms, Dattat-ray Karale, superintendent of police (Jalgaon) said, “I am not in a position to comment anything pertaining to the incident”.

Defending his actions, the minister told The Asian Age, “If the leopard suddenly appears, what do we do? Are we not supposed to protect people? It is a serious matter that six people have lost their lives. The fearful villagers have not been able to go to work. I was not on a hunting spree. I just saw him accidentally when went to meet a victim’s family. My intention was to prevent people from getting attacked.” He also added that he has the required licence for the weapon.

Sources said the latest victim Yamunabai Dala Tirmali (70) was attacked in her hut while sleeping at 3 am, in Varkheda Khurd village of Chalisgaon. Her son and daughter-in-law were sleeping in a row and the deceased was nearest to the door. Before they got up, the leopard had dragged Tirmali and broke her skull.

Hours earlier, Mr Mahajan had toured the area and consoled the families of the deceased. On Sunday, a leopard had killed a farm labourer in Warkheda.  Susabai Dhana Naik (55), who was picking cotton and was at a distance from the other cotton pickers, was singled out by the leopard. It attacked Naik from behind and dragged her into the field. Other labourers shouted and ran to save her. The leopard fled but it had already bitten off chunks from Naik’s head and face, killing her instantly.

Leopards have killed two other women and two teenagers in the area during the last three months. On November 15, a leopard had fatally attacked one Deepali Narayan Jagtap (25). After Jagtap’s death political parties including the Congress, Shiv Sena and

In March 2015, Mr Mahajan had come under fire for carrying a pistol while attending a
school function.

After a video of Mr Mahajan wielding a gun while searching for the leopard went viral, NCP spokesperson Nawab Malik demanded that he be kicked out from the Cabinet for flouting the Forest (Conservation) Act. Congress spokesperson Sachin Sawant said Mr Mahajan should be booked for the “stunt”.