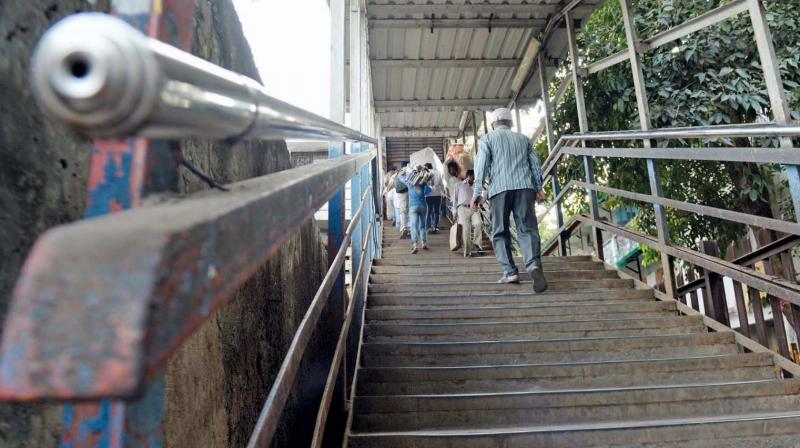 The Asian Age visited the Elphinstone FOB on October 28 to document the state of the bridge a month after the tragedy. (Photo: Rajesh Jadhav)

Mumbai: On the one-month anniversary of the Elphinstone tragedy that killed 23 people, most railway commuters said that there is hardly much difference in the way they travel today. Some commuters, though, pointed that the presence of police personnel at every exit and entrance at Elphinstone Road station does help as people maintain a certain kind of discipline, unlike earlier.

A flower seller, in particular, said they would like a separate access to the station as they carry their flowers to Dadar market. The Railways enquiry had concluded that one such flower seller had yelled out “phool padle,” (the flowers fell) which was misunderstood as “pool paddle” (the bridge fell) and which set off the stampede, which led to the tragedy.

Commuters like Chandramani Dalai were back on the suburban rail network the day after the tragedy, and felt that are no other options to get to work. He said, “I was back to go to work on Saturday, my office is in Goregoan so there is nothing much I could do. I only felt extremely uncomfortable walking on the bridge the next day because I knew what had happened there just 24 hours ago.”

Activists like Nirmal Takemgarh feel that the people of Mumbai have not come out to work because of the much-touted “Spirit of Mumbai” but due to the lack of an alternative option. He said, “If you and I cannot take the train to work, we probably cannot get to work. People living in Vasai, Virar, Dahahu or for that matter in Karjat and Kasara cannot come by road to work in town.”

He further added, “We have no other option to come to work so we take the train and there is no guarantee we will come back home on any given day and the reality of the matter is that the Railways cannot do anything for us in a day or a month, so we have to go and take these risks.”

As The Asian Age reported, it took only seven minutes — from start to finish — for the stampede to unravel on the fateful day of September 29.