The INS Khanderi is the second such diesel-electric submarine after INS Kalvari. 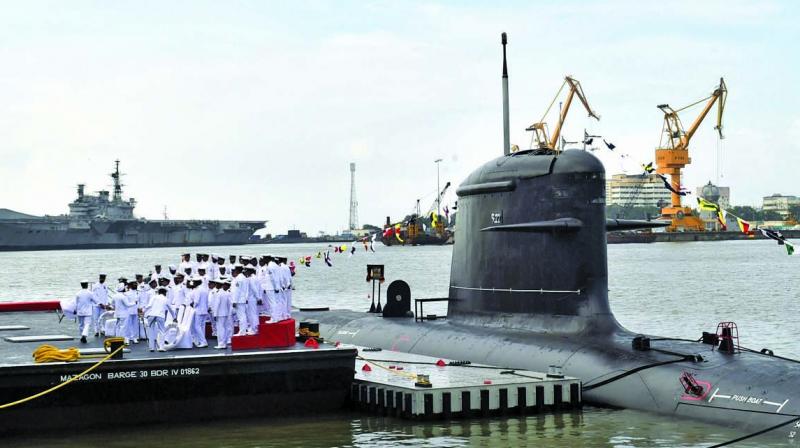 Mumbai: Union defence minister Rajnath Singh Saturday claimed that Pakistan was preparing to carry out another 26/11-like attack and that its nefarious intentions would fail in the face of a resolute Indian government.

“Our Navy is not a threat to any peace-loving nation. The truth is that the Indian Navy wants to build confidence and trust among smaller nations in the Indian Ocean. But some powers are conspiring to launch an attack like the 26/11. However, their intentions and actions will never succeed,” the Union defence minister said.

Mr Singh also warned Pakistan against armed conflict with India, avowing that with the strength of the Navy, “Pakistan sho-uld understand that today, with the strong resolve of our government and adva-ncement in our Naval cap-acity with additions like INS Khanderi, we are cap-able of delivering a much bigger blow than 1971.”

Mr Singh’s comments come on the back of Pakistan Prime Minister Imran Khan’s speech at the United Nations General Assembly, in which he raised the spectre of Kash-mir and cautioned the glo-bal body of “consequen-ces” if India and Pakistan – two nuclear armed nations – went to war.

“The Pakistan PM is going from door-to-door around the world and creating content for cartoonists,” Mr Singh said.

INS Khanderi is an electric attack submarine of the Indian Navy. It is a conventional submarine arsenal (weapon storage) designed for silent and stealthy sub-surface operations.

“She was handed over to the Indian Navy on completion of trials on Septe-mber 19. At 67.5metre long and 12.3metre high, Khan-deri embodies cutting-edge technologies that ensure stealthy, silent operations underwater and is equipp-ed with an array of torpedoes, missiles and sensors that enable her to detect, identify and destroy enemy targets,” he said.