The dry dock has over one kilometre of berthing space with sectioning to allow docking of multiple warships. 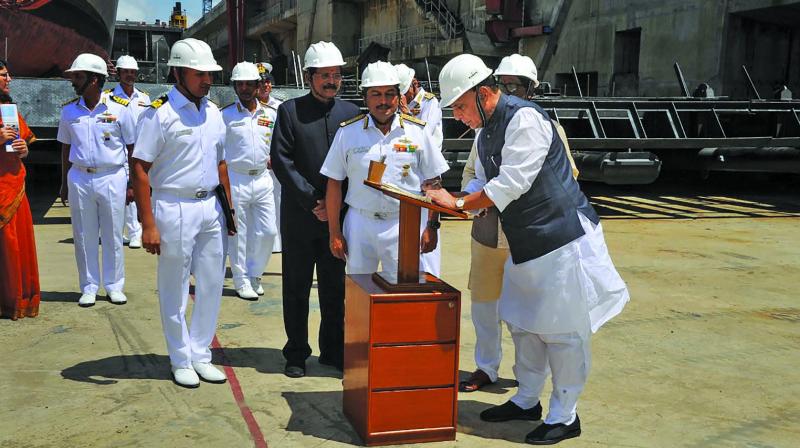 Mumbai: Union defence minister Rajnath Singh also inaugurated the Navy’s first aircraft carrier dry dock at the Naval Dockyard. The aircraft carrier dock is capable of accommodating INS Vikramaditya, IAC-I, the indigenous aircraft carrier under construction at the Cochin shipyard and ships with tonnage up to 90,000 tonnes, making it the largest dry dock of the Indian Navy.

Measuring 281 metres long, 45 metres wide, and 17 metres deep, the construction of the dry dock required innovative and extreme engineering methods. While most dry docks are constructed by excavating into the land and then providing access to the sea, the aircraft carrier dry dock is built into the sea, a technique that requires 38 caissons (watertight steel sections) to drain out sea water before construction can commence.

The dry dock has over one kilometre of berthing space with sectioning to allow docking of multiple warships. This results in faster turnaround time for maintenance and refit routines of the Indian Navy’s warships. The dry dock can be drained completely in just two-and-a-half hours and filled in one-and-a-half hours. Other features of the project include a ramp for heavy vehicles to access the dock floor, a 33.5 MVA power supply, and an under dock floor drainage arrangement to remove any seepage.

Started in 2010, the aircraft carrier dock was a unique project which overcame numerous challenges arising out of its sheer size and scale, and the complex technique of construction into the sea. The scale of the project is such that one-and-a-half times the amount of concrete used in the Bandra-Worli Sea Link and the same amount of steel used in the Eiffel Tower went into its construction.

The first stealth frigate under Project 17-A was launched at Mazagon Dock Shipbuilders Limited, Mumbai. In keeping with maritime traditions, Mrs Savitri Singh, spouse of chief guest and Union defence minister Rajnath Singh, broke a coconut on the ship’s bow and launched the ship to the rendition of an invocation from the Atharva Veda.

The Western Naval Command, Rear Admiral B. Sivakumar, Chief of Staff Officer (Tech), said, “The launch of the first warship, christened ‘Nilgiri’, marks a significant milestone in the indigenous warship design and construction programme, making India one of the few countries in the world having the capability to design, build and integrate systems for advanced stealth warships.”

Mr Singh said, “This has brought out that India prides herself as one of the few countries in the world to have acquired the capability for design and construction of ‘state of the art’ warships and submarines.”

While congratulating all the agencies associated with the milestone, the Union defence minister appreciated the close partnership of the Indian Navy and MDL, and the support of other organisations like DRDO, OFB, BEL and the private defence industry, which, he said, was a testament to the government’s “Make in India” policy.

A stealth frigate is a ship that employs stealth technology construction techniques in an effort to ensure that it is harder to detect by one or more of the radar, visual, sonar, and infrared methods. With a launch weight of 2,738 tonnes, the completed warship will be 149 metres in length and 17.8 metres in width and will have a tonnage of 6,670 tonnes.

Project 17-A is a follow-up of Project 17 which comprises the three Shivalik-class stealth frigates. The ships being built under Project 17-A will incorporate advanced design features and fittings to improve stealth such as radar suppression screens and radar transparent deck fittings. They will also be equipped with state-of-the-art sensors and weapons, and will have high levels of automation.