Arvind Kejriwal flags off 70 mobile vans to sell onions at Rs 23.9 per kg 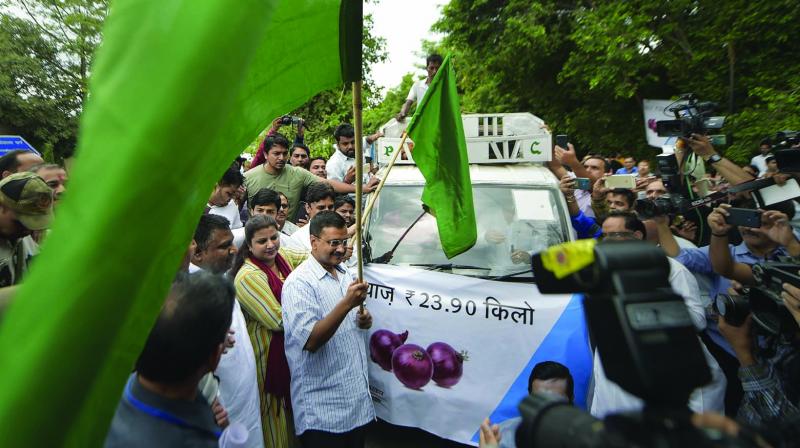 Chief minister Arvind Kejriwal flags off mobile vans which will sell onions in all the Assembly constituencies at the Delhi Secretariat on Saturday. (Photo: PTI)

NEW DELHI: Delhi chief minister Arvind Kejriwal on Saturday flagged off 70 mobile vans which will be selling onions at `23.90 per kilogram in all the assembly constituencies in the city.

The event was held outside the Delhi Secretariat, which was attended by food and civil supplies minister Imran Hussain and several Aam Aadmi Party (AAP) leaders.

“Flagged off 70 mobile vans from the Delhi Secretariat that are being stationed in 70 Assembly constituencies for sale of onion at `23.90 per kg. In addition, 400 fair price shops have also begun supply of affordable onion. We expect the market price of onion to reduce soon,” Mr Kejriwal tweeted.

While announcing the move on Friday, Mr Kejriwal had said a person can buy a maximum of five kilogram of onion at a time. He had also said that onion is being sold between `60 and `80 per kg in retail, adding that the new step would provide relief to the people of the city.

The government will procure one lakh kilogram of onions from the Centre in the next five days..