Nine killed as bus rams into tempo near Pune

The bus, which was headed towards Pune from Nashik, was carrying 27 passengers. 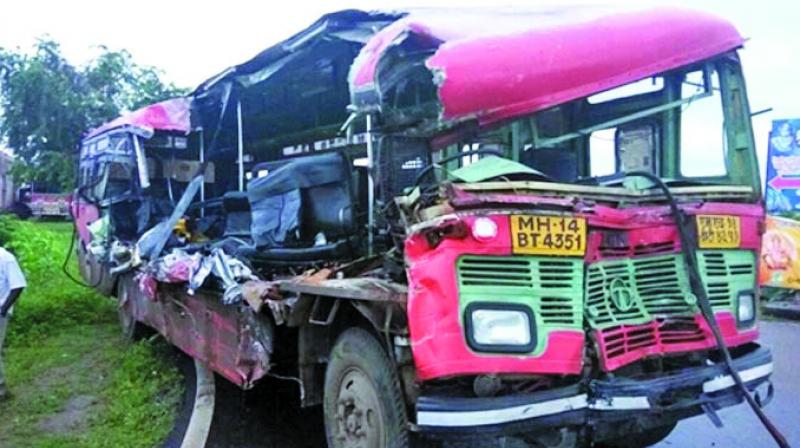 The bus was carrying 27 persons from Pune to Nashik.

Mumbai: In a fatal accident, nine persons died on the spot and fourteen others were injured at Narayangoan near Pune after a state transport bus collided with a tempo early on Monday. The bus, which was headed towards Pune from Nashik, was carrying 27 passengers.

The accident was severe, mangling the right side of the bus completely. Of the 14 persons injured in the accident, one is seriously wounded.

Ajay Gorad, assistant police inspector, Narayangaon, Pune Rural, said, “A tempo got punctured and its driver parked it at roadside on Nashik-Pune highway. The driver and a helper were trying to fix another tyre to the tempo at around 1-2 am in the rain. There were no enough streetlights on the highway. ST Bus Tryambkeshwar-Pune that belongs to Shivajinagar Depot was on its way to Pune. The bus driver who was driving at high speed could not see the tempo parked at the roadside and he rammed the bus into the tempo near Muktai Dhaba near Narayangaon near Pune.”

Mr Gorad added, “Nine people including seven bus passengers and the driver and helper of the truck died on the spot. Fourteen more got injured and one of them is seriously injured.”

He further said that despite being injured, the bus driver made sure to call the police station to inform about the accident. “We immediately reached the spot. Many people died on the spot and many were injured. We shifted all of them to nearby hospitals for treatment,” Mr Gorad said.