The Raigad Collector, Vijay Suryavanshi said, “We made provisions for the relatives of the deceased persons in the area. 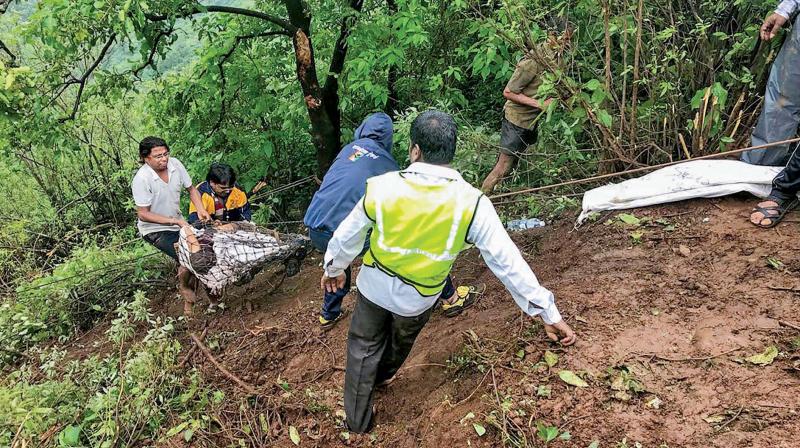 An eyewitness said that the bodies were torn apart due to the intensity of the accident. Meanwhile, incessant rains also created hurdles during the rescue operation.

Talking To The Asian Age, Mahad Tahsildar, Chandrasen Pawar said, “Local rescuers were on duty since morning, policemen from Poladpur station rushed to the spot to carry out the rescue operations. NDRF team from Pune and Thane has been roped in to recover the dead bodies which fell into the ravine.”

He added, “The rains created hindrance as the soil became moist due to which the rescuers were unable to form a proper grip while pulling out the dead bodies.” 33 people died of which 14 bodies were recovered. Post autopsy the bodies were handed over to relatives for final rites.

The Raigad Collector, Vijay Suryavanshi said, “We made provisions for the relatives of the deceased persons in the area. We also deployed an additional team of doctors to assist the primary health care centre of Poladpur where the autopsies were done.”

One of the victim, Nilesh Tambe’s relative Santosh Sawant said, “I am in the state of shock as we were not aware about the mishap. He had shared pictures with his friends on the family group and here I am about to take his body to perform the last rites. This is very strange.”