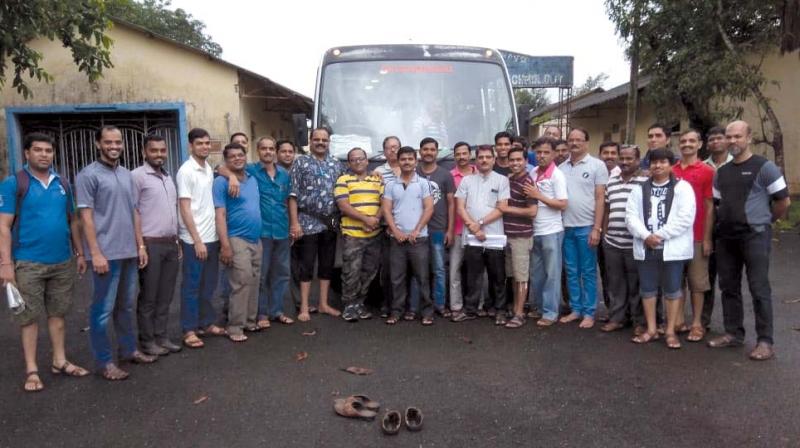 The ill-fated staff members of the university who were traveling in the bus.

Mumbai: Thirty-three employees of Dr Balasaheb Sawant Konkan Krishi Vidyapeeth, an agricultural university, lost their lives after the bus in which they were travelling plummeted into a 500-foot-deep gorge in Ambenali Ghat in Raigad district. Only a single passenger, Prakash Sawant-Desai (45), survived as he had jumped out off the vehicle after it spun out of control while the driver was navigating a sharp turn. Mr Sawant-Desai, a professor at the Dapoli-based university, climbed up from the valley and dialled the police to inform them about the accident.

Anil Paraskar, superintendent of police (SP), Raigad, said that the passengers were on their way to Mahabaleshwar, a hill station in Satara district in Western Maharashtra, for a picnic, when the driver lost control over the vehicle while negotiating a turn.

Subsequently, the rescue machinery swung into action and at least 12 ambulances and local trekking teams were rushed to the spot to search for more survivors. Since the bus had plunged into the deep gorge, the possibility of finding any survivors was bleak, officials said. National Disaster Response Force (NDRF) teams were pressed into action from Pune and Thane to assist the local administration in retrieving the bodies. The 25 strong team reached Ambenali Ghat around 6.30 pm.

The rains and treacherous route to the wreckage exacerbated search and rescue operations.

“We have retrieved 15 bodies until now. An investigation into the accident will be carried out after all the bodies are retrieved. The accident took place post-noon and the retrieved bodies are being sent to civil hospital in Poladpur,” said Mr Paraskar.

Preliminary details did not help ascertain the exact reason behind the incident, the police said, adding that there was no visibility issue or fog when the accident took place.

Mr Sawant said mud and loose stones on that particular stretch of the ghat road caused the bus tyres to skid, but the police stated that the bus did not slide into the gorge due to the deposits of sand on the turns as per the claim of Mr Desai.

Mr Desai, who spoke to media shortly after his ordeal, said, “The bus had slipped while negotiating the lump of sand on the turn.” Originally, 40 people were supposed to join the trip, but some of them opted out at the last moment because the bus was small and there was no space, Mr Sawant said. “Six of my colleagues were lucky as they had to cancel their trip as the bus was a 33-seater and couldn’t accommodate more persons,” he said.