The Deoras had been living on the third floor of the Siddhi Saidarshan for past several years. 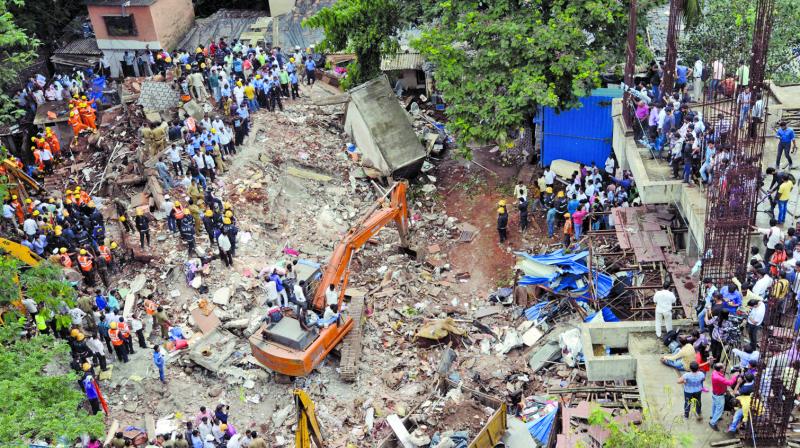 The civic body had formed a three-member committee to probe the collapse.

Mumbai: Eighteen-year-old K.J. Somaiya College student Vardhan Deora’s world came crashing down on Tuesday morning. The Class 12 student’s parents and grandmother were inside the ill-fated four-storey Siddhi Saidarshan building, which collapsed around 10.35 am.

Deora — who survived because he was attending lectures in college at the time of the incident — is yet to get over the trauma. The youth is currently staying with relatives, and is still to open up about his ordeal.

The Deora family had been living on the third floor of the Siddhi Saidarshan for the past several years. Deora’s father, Vijay (52); mother, Heena (46); and his grandmother, Subhadraben (77), lost their life in the collapse.  “Vijay is my brother. We have two other sisters, and all of us used live together like a joint family.  On Tuesday, half an hour after my sisters and I went to visit a nearby temple, we got a call about the collapse and we rushed to the site. By the time we reached, everything was destroyed,” said Rajesh Deora, a survivor.

Meanwhile, Deora’s neighbour Vandana Singh and all her family members were miraculously unscathed. “I was out buying medicines while both my children were in school and my husband was in his office. I am lucky that none of my family members were hurt,” said Ms Singh.

The death toll in the tragedy is 17 so far. The probe into the collapse is still going on,  and the special three-member  panel set up by the Brihanmumbai Muni-cipal Corporation (BMC) to probe the incident will submit an inquiry in the next 15 days.

Meanwhile, As a part of the ongoing inquiry, Mr Singhal visited the site of the collapse and recorded the survivors’ statements. He assured them that fair investigation would be carried out.

“The investigation process is in full force and if any official is found guilty, action will be taken,” Mr Singhal told The Asian Age.