The aircraft comes down hard just before construction site, and immediately bursts into massive ball of flames which engulfs entire area. 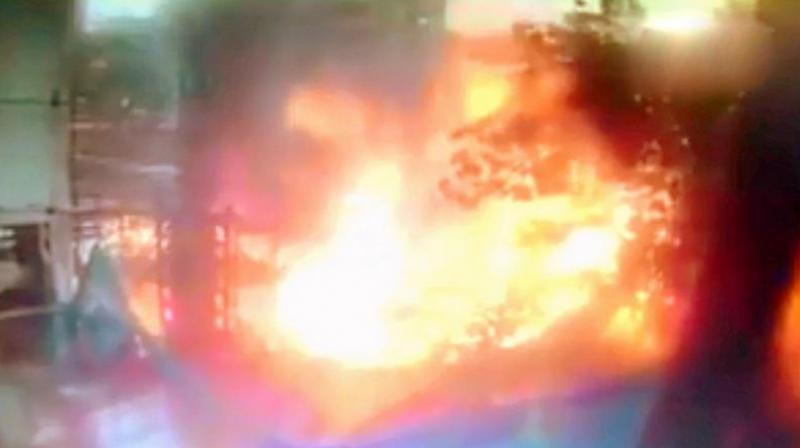 The new video, shot from a camera placed at a building across the road from the crash site, shows the plane tumbling into the steel girders that had been erected at the construction site. (Photo: Screengrab | ANI)

Mumbai: A day after the chartered plane crashed in Mumbai, a new CCTV footage has emerged showing how the aircraft exploded on impact leaving all four people on board the ill-fated flight dead.

The video, shot from a camera placed at a building across the road from the crash site, shows the plane tumbling into the steel girders that had been erected at the construction site.

The aircraft comes down hard just before the construction site, and immediately bursts into a massive ball of flames which engulfs the entire area.

#WATCH: Moment when a chartered plane crashed in Mumbai's Ghatkopar yesterday. 5 people, including 4 on-board, lost their lives in the crash. pic.twitter.com/wjqt4ZZOHa

On Thursday, a CCTV footage captured from another angle showed the aircraft falling on the road just before it goes up in flames.

The fire that spread over a 50-metre radius, was accompanied by a loud bang which had locals rushing out of their houses and running to the crash site.

Read: Airplane crashed in Mumbai declared 'unserviceable' after UP accident

Two pilots, two maintenance engineers, and a man who was at the under-construction site were killed in the crash that took place at around 1:10 on Thursday afternoon.

Before the flight test, one of the pilots, told her husband that the weather conditions were not favourable for the test run on Thursday.

Husband of Captain Maria Zuberi told that his wife called her before the flight test and said that it won’t be flown due to the bad weather.

The plane took off for its 50-minute test flight a little after noon from the Juhu Aerodrome. At a height of around 700 feet, the plane was hit by a snag.

Captain Maria Zuberi and her co-pilot Captain Pradeep Rajput’s presence of mind saved a school and several high-rises as they manoeuvred the plane to crash into a construction site.

According to reports, after the aircraft met with an accident at Uttar Pradesh's Allahabad in 2009, the Directorate General of Civil Aviation (DGCA) had declared it "unserviceable".