A DGCA team from Delhi will conduct a preliminary investigation into the plane crash. 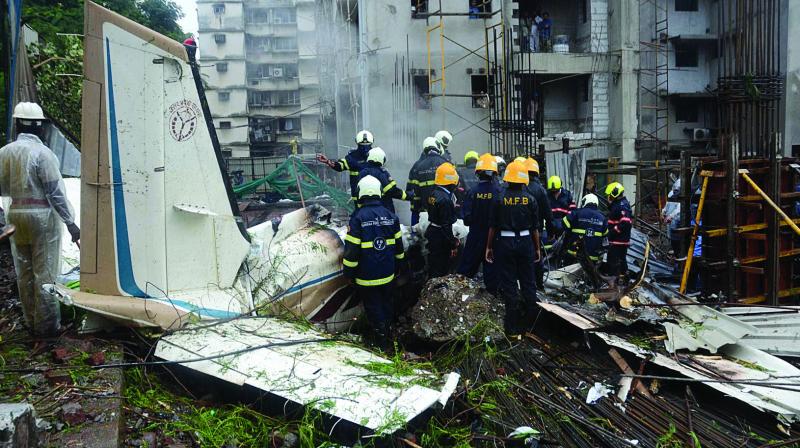 Forensic department personnel carry out investigations at the site of the plane crash in Mumbai. (Photo: Shripad Naik)

Mumbai: The pilot of the chartered plane that crashed into a construction site in Ghatkopar diverted the aircraft to a secluded spot to crash land to cause minimum damage and loss of lives. The black box of the aircraft has been recovered that could reveal what went wrong in the minutes before the crash. A DGCA team from Delhi will conduct a preliminary investigation into the plane crash. Along with fire-fighting personnel, police officials, including CP Datta Padsalgikar, arrived at the spot to supervise the rescue operations.

“We spoke to locals who witnessed the crash and it seems that it was a decided landing. However, it has still not been confirmed and the investigation is ongoing. We have recovered the black box and are trying to get additional information,” said Akhilesh Singh, deputy commissioner of police (DCP), Zone VII.

A black box is basically an electronic device used by investigators to discover the cause of crash and to may be prevent others.

He further added, “We are checking if any one else is trapped in the debris. Also, all concerned agencies are on the ground for further investigations.”  The NDRF team used trained dogs to check for more trapped persons, if any.

“We salute the pilot who showed presence of mind and avoided a big mishap, saving lives at the cost of her own life,” tweeted Praful Patel, former civil aviation minister.

Fully occupied residential buildings surround the crash site, which is located close to the Ghatkopar’s Telephone exchange.  “It could have been a major mishap if the aircraft passed through any of the buildings. We saw the flames erupting out of the craft reaching the road,” said a resident from the adjoining building.  The aircraft crashed at the under-construction site of realty group Lifescapes.

The aircraft crashed at the under-construction site of realty group Lifescapes. The project has been delayed for a long time due to pending clearances. Civil aviation minister Suresh Prabhu directed the Directorate General of Civil Aviation (DGCA) to conduct an investigation into the plane crash. The AAIB will also probe.