Ghatkopar crash: Close save for labourers on a lunch break

The aircraft that took off from Juhu Airport crashed at 1.16 pm. 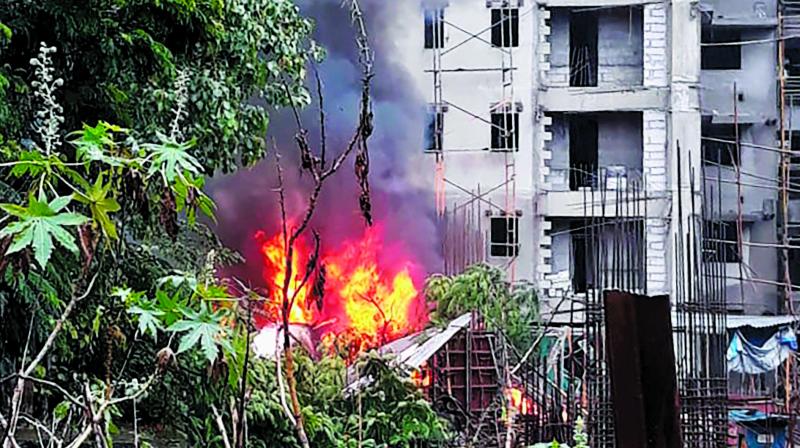 Eyewitnesses of the crash heard explosions for 15 minutes and saw flames spewing out. (Photo: PTI)

Mumbai: Eyewitnesses at the site in Ghatkopar where a chartered plane crashed on Thursday afternoon, killing five persons, said they had heard a loud, deafening explosion. A few others, who the saw the aircraft approaching the open area, said that it was dangling while landing. Almost instantly, flames arose and leaped outside the construction compound onto the road outside, where a charred body was found.

“I was in my apartment when I heard a huge explosion. Then I saw huge flames erupting out of the crashed plane. I, along with a few others, rushed to the site, but we could only find charred bodies,” said Prakash Shrigirish, a resident from the ninth floor of the adjoining building.

He further added, “A completely charred body was found on the footpath. We could only recover his identity card which was partly burnt. After the plane crashed, it had minor explosions for the first 15 minutes.”

According to locals, labourers were out on a lunch break when the crash occurred. This prevented a major mishap.

Vivek Sudana, who has purchased an apartment in the under-construction building located next to crash site, saw the aircraft coming dangling towards the open area.

Residents extended a helping hand to the rescuing agencies by forming a human chain near the crash site, restricting other locals from entering the site. Also tea and refreshments were served.