Airplane crashed in Mumbai declared 'unserviceable' after UP accident

The aircraft that crashed was on its maiden flight in nine years and was transported to Mumbai from Delhi by truck. 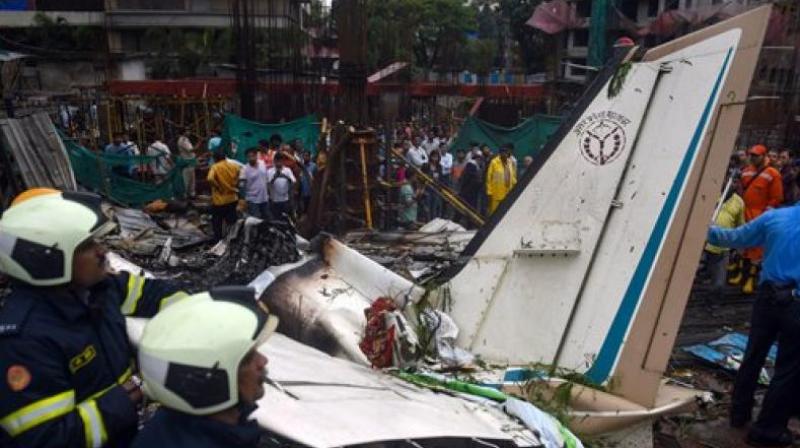 Before the flight test, one of the pilots, told her husband that the weather conditions were not favourable for the test run on Thursday. (Photo: PTI)

Mumbai: The chartered plane that crashed in Ghatkopar, a congested suburb of Mumbai, killing all four on board and a construction worker on the ground, had been under repair for months before its test flight on Thursday.

The 26-year-old small plane that crashed on Thursday was on its first flight in around nine years, sources to NDTV said, adding that the aircraft was transported from Delhi to Mumbai by a truck.

According to reports, after the aircraft met with an accident at Uttar Pradesh's Allahabad in 2009, the Directorate General of Civil Aviation (DGCA) had declared it "unserviceable".

Engineers of Indamer, an aviation repair and maintenance company, had been fixing the Beechcraft King Air C90 model for months.

Before the flight test, one of the pilots, told her husband that the weather conditions were not favourable for the test run on Thursday.

Husband of Captain Maria Zuberi told that his wife called her before the flight test and said that it won’t be flown due to the bad weather.

The plane took off for its 50-minute test flight a little after noon from the Juhu Aerodrome. At a height of around 700 feet, the plane was hit by a snag.

Captain Maria Zuberi and her co-pilot Captain Pradeep Rajput’s presence of mind saved a school and several high-rises before crashing into a construction site.

Locals and residents living near the crash site were clueless after hearing a loud noise and seeing a gush of fire following the accident.

"The explosions following the crash and flames leaping in the air were so huge that initially we could not understand what has happened," DNA quoted Prakash S Giri, who lives opposite the construction site where the plane crashed, as saying.

He said that the toll could have been higher had the plane hit any of the high-rises around the area.

"The pilot did not let this happen. I think the pilot purposefully manoeuvred the plane to this site to avoid casualties," Giri added.

Giri said he was having his lunch when he and his family members heard the explosion. They immediately rushed out and saw a burning body near the crash site. “We tried to save the man but the flames had engulfed him so completely that we found ourselves helpless," Giri said, recalling the horror.

According to reports, one of the eyewitnesses said that a man residing on the third floor of a building nearby jumped out from the balcony after the crash, fearing that his building was going to collapse.

Another resident from the neighbourhood, Pushpa Patel said she had just sat down in the balcony of her sixth-floor flat, when she saw "a huge ball of fire", as the plane crashed outside her building. "It left behind a trail of fire, like we see in action movies. I was scared...," Mid-Day quoted Patel saying, adding that, "We are used to planes overhead. But this I will never forget. There were cries and panic and chaos; we couldn't register what was happening, it was all so sudden."

Watch the CCTV footage of the crash:

The CCTV footage from buildings in the area showed how the crash that lead to death of four people on board and a construction worker took place.