5 killed as plane on test flight crashes in Mumbai

The deceased and three injured were sent to Rajawadi Hospital. 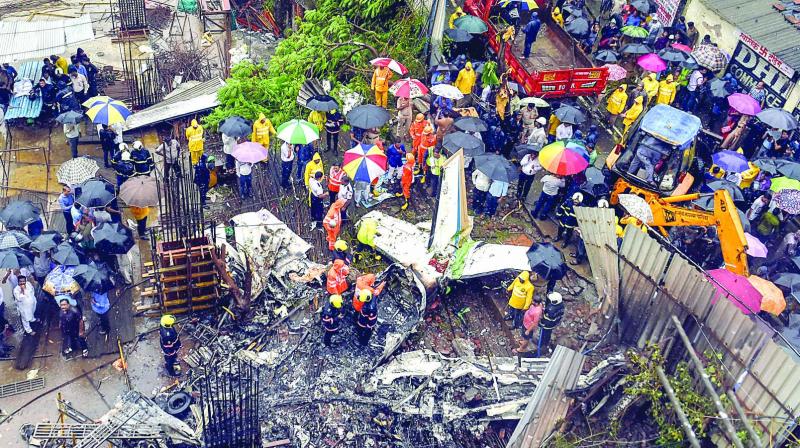 Rescue personnel and locals stand near the debris of the chartered plane that crashed in Ghatkopar’s Jivdaya Lane, killing 5 people, in Mumbai on Thursday. (Photo: PTI)

Mumbai: Five people died after a 12-seater King Air C90 chartered jet crashed in to an under-construction site in Ghatkopar on Thursday when it was on a test sortie. Among the dead were the aircraft’s four-member crew — pilots Capt P S Rajput and Capt Maria, two aircraft maintenance engineers, Manish Pandey and Surbhi—and a pedestrian.

The deceased and three injured were sent to Rajawadi Hospital. The aircraft (VT-UPZ) had taken off from Juhu Airport and crashed around 1 pm. Officials from the fire brigade, NDRF and police reached the spot to undertake rescue operations. The aircraft belonged to Mu-
mbai-based  U Y Aviation Pvt Ltd. The aircraft was bought from the UP government in 2014. Several residential buildings surround the crash site with one building under construction with makeshift tenements for labourers.

Fire officials received a call at 1:16 pm when the aircraft had crashed into Old Maniklal lane in Ghatkopar West.

“The investigation is ongoing and the report would be out in the next 2-3 days,” said Hemant Parab, chief fire officer (CFO), Mumbai Fire Brigade. Nand Gopal Gupta, civil aviation minister of UP, tweeted, “VT-UPZ was Uttar Pradesh government aircraft till 2014.” CM Devendra Fadnavis visited the site. Union aviation minister Suresh Prabhu said guilty should be punished.