The private bus in a bid to take over an auto rickshaw plying ahead of it, collided with the ST bus. 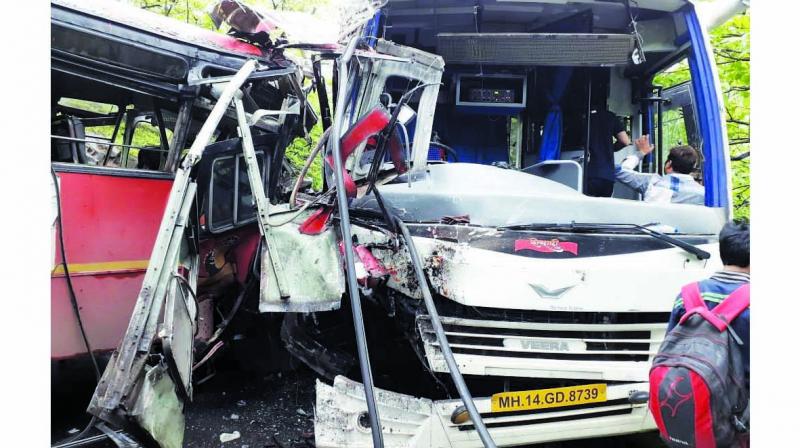 The drivers of both buses sustained major injuries and have been shifted to Mumbai for further treatment.

MUMBAI: In a major bus accident, a Maharashtra State Transport bus (ST) and a Shivshahi bus collided head-on near Karle Khind village in Alibaug in Raigad district at 9.30am on Thursday morning in which both vehicles were damaged extensively.

Around 40 persons including the driver were injured in the accident. All were rushed to a local civic hospital where three of them are said to be in a critical condition and were later shifted to Mumbai’s Sion Hospital for further treatment.

The private bus in a bid to take over an auto rickshaw plying ahead of it, collided with the ST bus.

The passengers were rushed to a local civic hospital, while drivers were admitted to Mumbai’s civic-run Sion Hospital.

Police said that it was raining heavily in the Alibaug at the time of the accident and they have not been able to piece together the sequence of events that led to the accident.

Inspector Suresh Varade, Raigad traffic police said, “The luxury bus driver was trying to overtake a minidor auto rickshaw at a no overtaking hill area with sharp blind turns when it dashed against the ST bus. Traffic was hit for around three hours.”

A police official from Raigad division said, “The main focus at the time of accident was to save the lives. The police probe will pick up pace after the statements of both drivers are recorded.”