The complex has also started selling excess manure to nearby societies. 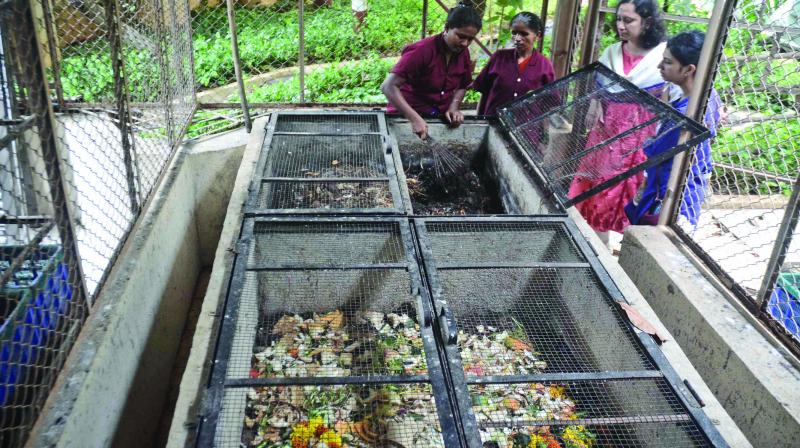 The 420-member housing society not only segregates dry and wet waste but also has a compost plant.

Mumbai: Housing societies that are facing the Brihanmumbai Municipal Council’s (BMC) wrath can learn a thing or two from an apartment complex in Kurla when it comes to waste management. The Kohinoor City phase I complex in Kurla (west) is ahead of its time, even as other housing societies are running from pillar to post to comply with the BMC’s cleanliness and sanitation rules.

The 420-member housing society not only segregates dry and wet waste but also has set up a compost plant, which produces manure from the wet garbage. It has also developed an organic garden on its premises, where several vegetables are being cultivated.

The compost plant, set up by NGO Stree Mukti Sanghatana, consists of four pits in which 250 kg of wet waste generated from all 11 buildings in the complex is recycled to produce manure. It produces about 50-60kg of manure, which is used for gardening in the society and also for the organic garden. The complex has also started selling excess manure to nearby societies.

“The plant has resulted into almost 50 per cent savings on our waste management,” said society member Rashmi Bhure, who is also the vice-principal of SIES College, Sion. “The developer has provided an organic waste converter to our society, but its running cost, including the electricity and labour expenses, was too high. The compost plant, on the other hand, has been built just at about `45,000. It not only provides free manure but we can sell excess compost too,” she said.

Initially, it was difficult for the society to convince member for the project. “There were some sceptics, who were not sure in the beginning. But I had witnessed the advantages of composting in our college, where the same NGO had sent up a plant. We decided to rope in Stree Mukti Sanghatana to sensitise residents and maids about the importance of segregation and waste management. We also visited other compost plants at Rajawadi Hospital and housing societies in Chembur to understand the process,” said Ms Bhure.

In the society’s compost plant, bacterial culture has been put at the base of the pit, in which crushed food and garden litter are dumped for decomposition. The bacterial culture decomposes the food waste and also fights the foul smell, before producing the manure. “We have as many as 238 trees in our complex. Litter, including flowers and leaves from these trees, earlier used to go to dump sites. But now they are used to produce manure,” said society secretary Tulshidas Patade.