B-town participates in protest against lynching of 16-year-old

The mob killed two others – Junaid’s cousin and a friend. 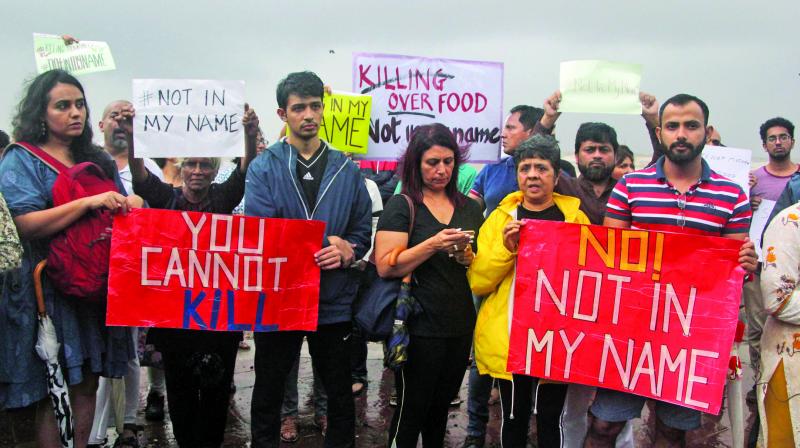 Mumbai: Hundreds including Shabana Azmi, Konkona Sen Sharma and Kalki Koechlin participated in a silent protest organised at 5 pm on Wednesday at Carter road promenade, Bandra west. Participants were seen holding boards and banners as an extension of the online campaign “Not in my name” started by a Delhi-based filmmaker to protest the killing of 16-year-old Junaid Khan who was returning from Delhi. Junaid was accused of being a “beef eater” and stabbed to death by co-passengers on a train headed from Delhi to Mathura. The mob killed two others – Junaid’s cousin and a friend.

Actress Azmi said “This is an excellent platform to convey to the masses that people have had enough and will not tolerate this mob lynching anymore. It is a happy scene where so many Mumbaikars have come out in support of this campaign. This is a serious issue and people should come forward to show their anger.”

The silent protest saw many raising slogans such as “Do not kill humanity, do not kill in my name”. Andy Rodrigues, who was part of the human chain formed during the protest, said, “This is an excellent way to show to the government that we will not remain quiet and we are not happy with the way officials have dealt with this issue. Had they dealt with it correctly, we wouldn’t have taken to the streets to show our anger.”

VJ-turned-actor Ranvir Shorey said, “This is a complete failure of law and order, and if this is the case after more than 60 years of India being independent, one should really conduct a self examination of one’s virtues and practices.” The likes of Nandita Das, Saba Azad and Jim Sarbh too were part of the protest.

Tags: shabana azmi, not in my name, junaid khan