The dead bodies were fished out of the slurry by a team of NDRF. 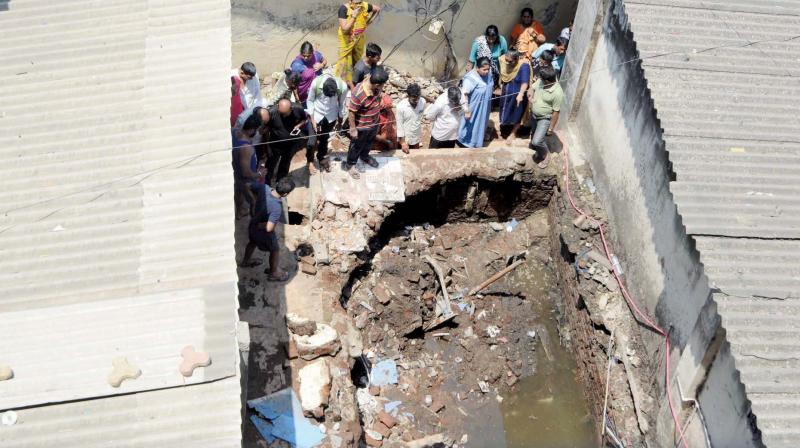 Firemen remove the bodies of the two victims with the help of the National Disaster Response Force after struggle of six hours. (Photo: Shripad Naik)

Mumbai: Two persons including a woman died after the floor of a public toilet complex in Bhandup collapsed inside the septic tank on Saturday.

The 20-seat facility had two occupants when the accident occurred. Their bodies were later fished out of the slurry by a team of National Disaster Response Force (NDRF).

The Bhandup police said that the incident took place at 6.30 am and they have registered an accidental death report.

The deceased persons were identified as Lobaben Jethwa, 42, and Babulal Devase, 45, both residents of Sai Sadan Chawl in Pimpleshwar Colony in Bhandup (west).

The investigators said that they are probing the angle of possible negligence in the incident. The locals alleged that the toilet had been last repaired eight years ago.

“All angles including negligence, lack of cognisance of complaints will be investigated. Statements of those concerned and the complaint letters will also be taken on record,” said an officer of Bhandup police station.

The wife of the deceased had been to the latrine minutes before her husband. "I had told him that the floor was shaky and suspicious, but nobody took it seriously," Jethwa's wife said.

“The toilet was built in 1980 and belongs to the BMC, as per the details we have. We will inquire into the allegations of the locals and seek details of the same from BMC on its repairs and maintainable contracts. Based on the probe further action will be taken against those concerned,” said Shrinivas Panhale, senior inspector of Bhandup police station.