The activist says she is being harassed by 22 defamation cases, which have been filed against here in various parts of the state. 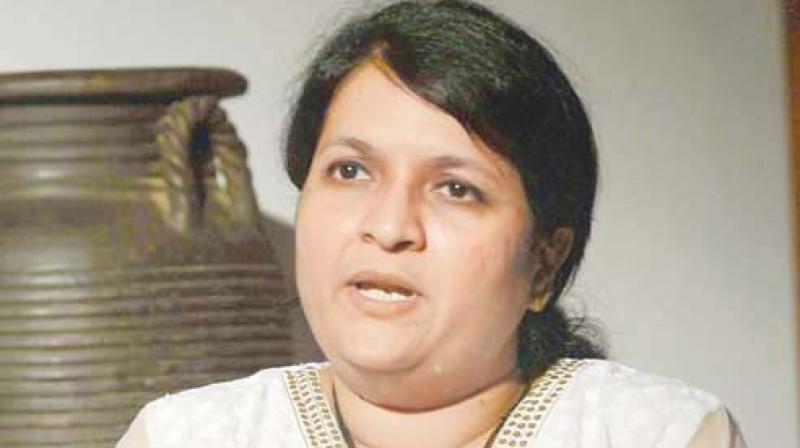 Mumbai: RTI activist and former Aam Aadmi Party (AAP) leader, Anjali Damania has been receiving obscene calls for the last three days after unknown persons displayed her mobile number on trains. Ms Damania said that these calls were from unknown people from various parts of the state, who use filthy language with her. The activist alleged that this “disgusting” act was done at the behest of politicians to harass her.

She had levelled serious allegations of corruption and disproportionate assets against the Bharatiya Janata Party leader Eknath Khadse and several Nationalist Congress Party leaders, including the jailed Chhagan Bhujbal. She had raised the issue of the MIDC land scam against Mr Khadse, who hails from Jalgaon, which then lead to him stepping down from the state Cabinet.

Ms Damania shared her ordeal on social media on Friday. Recounting the experience, she tweeted, “This is the disgusting and sick level to which politicians can fall. Last three days I have been harassed by calls from Jalgaon, Bhusawal, Surat and Gorakhpur, at all odd hours from sick people. Just now a man called from a passenger train heading to Bhusawal.” She also shared a picture of her phone number, which was inscribed on a paper pasted inside a railway coach.

Earlier in the week, Ms Damania had met additional chief secretary (home) Sudhir Kumar Shrivastava on this issue. Mr Shrivastava had directed the joint commissioner of police (law and order) Deven Bharti and railways authorities to take prompt action in the case, following which a team of the officers have been sent to Jalgaon and Bhusaval.

The team had removed various posters of Ms Damania’s number. This paper tried to contact both officials, but they did not respond. But a police officer, who is attached to the Vakola Police station, requesting anonymity, said that a team had been sent to Jalgaon and was investigating the case.

“We are searching for the posters in north Maharashtra and taking the help of Government Railway Police (GRP) to track the person who is pasting such posters in the express trains,” he added.

Speaking to The Asian Age, Ms Damania said, “ My fight has been against corruption in the high court and with investigation agencies. But unfortunately I am being harassed by 22 defamation cases, which have been filed against me in various parts of the state. The latest case was filed on April 19 by Kishor Pujari, who is an aide of Ravi Pujari. Now, this sort of harassment, getting a call in the wee hours of the morning by railways passengers and people from housing colonies of Jalgaon and Bhusaval. At the moment, I don’t know who is behind the calls but the locations are raising lot of suspicion in the mind,” she added.