The police is yet to register a first information report (FIR). 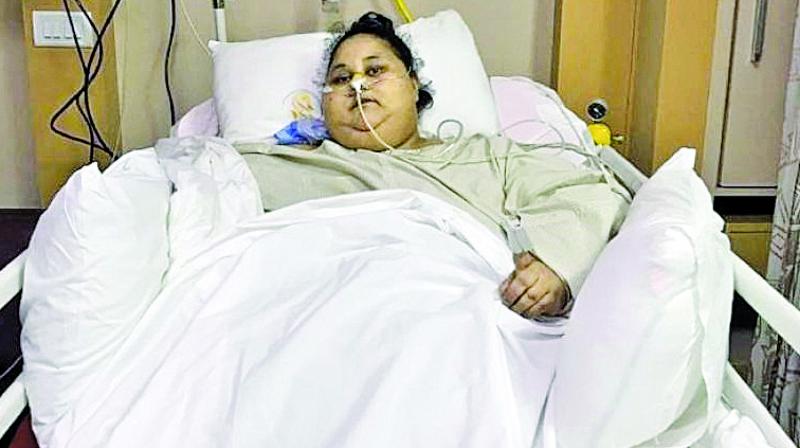 The hospital said the behaviour of Shaimaa Selim had forced them to approach the police.

Mumbai: Saifee Hospital, where Egyptian Eman Ahmed, who was once said to be the world’s heaviest woman is undergoing weight-loss treatment, has submitted a written police complaint against Ms Eman’s sister Shaimaa Selim for not heeding to medical advice given by doctors.

Sources in the VP Road police station where the hospital registered a complaint, said the complaint letter was submitted by the hospital management stating that Ms Selim is not listening to instructions of Ms Eman’s doctors and disregarding the day-to-day treatment procedure. The police is yet to register a first information report (FIR).

“They gave us a written complaint stating a patient’s sister was acting against the medical advice given by her doctors,” he said. Mr Kamble added that the written complaint did not ask them to register an FIR or book Ms Selim under any section.

But a source in the police station said there was not much the police could do in the case. “They told us that Ms Selim, the patient’s sister, gave her water directly instead of giving it to her through a tube. They came to us but what can we do in this case? It’s a matter of the hospital’s internal security,” the source said. He added they have no grounds to register an FIR.

“We won’t even be approaching the court about this. What can we do if a patient’s family is not listening to the doctors? Its such a petty issue,” he said.

Dr Aparna Bhasker, section chief of bariatric surgery at Saifee and who was treating Ms Eman, said Ms Selim made Eman drink water through her mouth. “This might have led to certain complications...Despite all warnings she was shouting and creating nuisance and spoiling the environment  of the hospital. The behaviour of Ms Eman’s sister compelled us to call the police,” Dr Bhasker said.