Commuters inside the train had pulled the chain for the emergency brake and handed Ms Tripathi her son back. 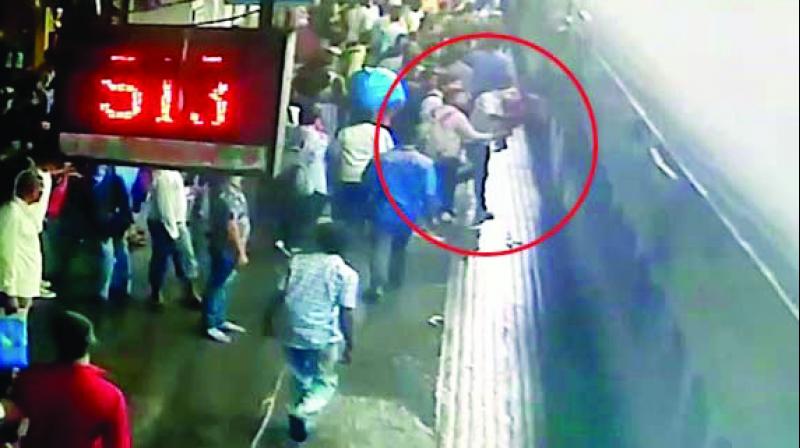 The daring rescue at Kalyan station was caught on CCTV.

Mumbai: Railway Police Force (RPF) sub-inspector B.S. Narwar from Kalyan is set to receive the prestigious bravery award for pulling out a woman from the gap between a moving train and the platform at Kalyan.

The daring rescue can be seen on CCTV footage where the woman who was carrying baggage, later identified as Archana Tripathi (25), is seen handing over her son to a passenger inside a compartment of the Godan Express and then slipping while trying to board it. The award, which is conferred on RPF officers across 16 railway zones, will be bestowed on Mr Narwar in Delhi on April 1 in the presence of the chief security commissioners of all zones.

Stating that he accepts the award with all humility, Mr Narwar said, “The incident occurred in July when the train was leaving Kalyan around 11.56 am. I was patrolling the area, when I heard a commotion. I could see that one leg of the woman was already in the gap and grabbed her by the arm and shoulder and yanked her to the platform.”

Commuters inside the train had pulled the chain for the emergency brake and handed Ms Tripathi her son back. After the commotion died down, both mother and son boarded the train and reunited with her husband who was inside the train.

The alert RPF officer said, “It is a fact that many people make the life-threatening mistake of getting into running trains and the stairs of express trains are even more tricky than those of local trains.”