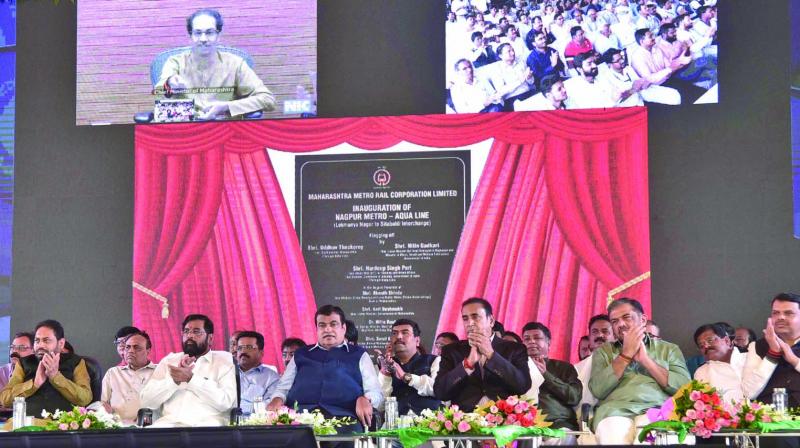 Mumbai: Chief minister Uddhav Thackeray on Tuesday praised his predecessor Devendra Fadnavis and Union minister Nitin Gadkari, both BJP leaders, for initiatives taken by them for development of the state.

Mr Thackeray, who is also president of the Shiv Sena, the BJP’s former ally, said both leaders, who hail from Nagpur, should work hand in hand for development of Maharashtra.

Mr Puri took part in the inauguration through video link from Delhi. With the inauguration of Aqua Line (East-west corridor), 25km of Nagpur Metro project (two third of the total length) has become operational.

Mr Thackeray praised Mr Gadkari for fulfilling Sena founder and his father late Bal Thackeray’s dream of having a sea bridge linking Worli in south Mumbai to Bandra, a western suburb. The cable-stayed bridge was inaugurated in 2009.

On a lighter note, Mr Thackeray said, “Though we could not sit together in one vehicle, at least we have come together on this occasion (for metro line inauguration), apparently referring to collapse of the saffron alliance.

Mr Thackeray also praised and thanked Fadnavis, a former BJP chief minister, for efforts taken by him for development of Maharashtra during his tenure (2014-19).

I am saying from my heart that I dont want to take credit of this good work and want to give credit to all who have worked hard for this project. “In politics when it comes to taking credit for work then a politician is not a politician if does not take credit for a work. But, I want to humbly say we do not want to take credit but just blessings of people, said Mr Thackeray. The chief minister expressed the hope that both state and central governments will work together for development of  the state.

Mr Gadkari, who personally took interest in execution of the metro project in his hometown, praised all those involved in the infrastructure venture.