The play was being staged at Annabhau Sathe auditorium at 1 pm Saturday amid tight police security. 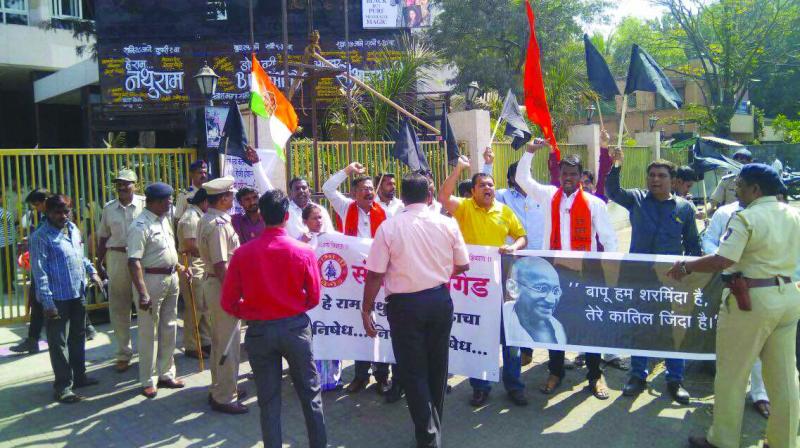 Protestors the venue in Pune.

Santosh Shinde, president, Sambhaji Brigade, Pune district said, “Mahatma Gandhi’s contribution to independence gave him the status of Father of the Nation. His murder is a condemnable act and cannot be justified in any way. Killing anybody for that matter is unjustified. However this play also tries to glorify the murder. This is beyond tolerance. That is why we protested against the play peacefully.”

He also added, “It is no secret that Sharad Ponkshe belongs to Rashtriya Swayamsevak Sangha (RSS). And the RSS backed BJP government in the state supports the play. We have sent letters to chief minister Devendra Fadnavis but we didn’t get an answer. We want the government to ban the play forever. And Ponkshe should be tried under sedition charges.”

Meanwhile Sharad Ponkshe said, “We staged 800 shows of my earlier play Mi Nathuram Godse Boltoy. But after going through the play I thought the play needed to be revised. And thus Hey Ram Nathuram was born. Censor board of Maharashtra approved my play without a single cut. If the play were about creating hatred among people it would not have got censor certificate. This play is also being run houseful.”