The OBC community has been backbone of BJP for the last 20 years in the state. 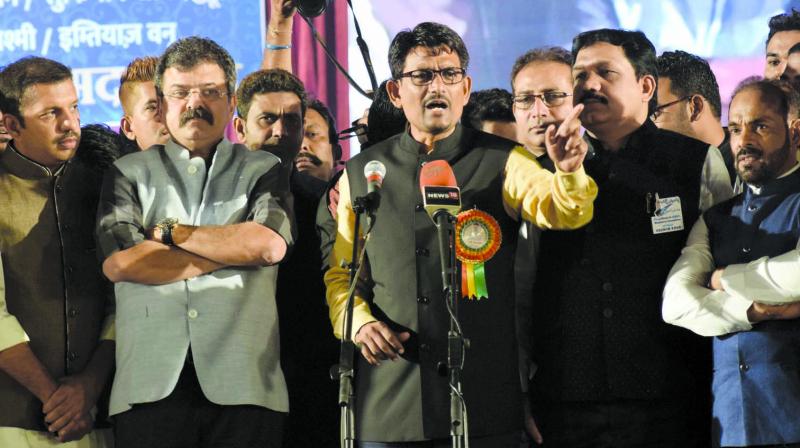 Thakore was speaking at a mushaira event in Mumbra. (Photo: Deepak Kurkunde)

Mumbai: Gujarat’s newly-elected MLA and youth OBC leader, Alpesh Thakore has appealed to all OBC youth to come together against the Bharatiya Janata Party (BJP) in Maharashtra. Mr Thakore accused the BJP of having an autocratic approach and making undemocratic decisions. He said that he was ready to go to every corner of Maharashtra to dethrone the BJP in the state.

This was Mr Thakore’s first visit to Maharashtra after winning in the Gujarat assembly elections. He was in Mumbra to attend a mushaira and received a grand welcome. In his speech, he shared his experiences from Gujarat. “Everyone had told us that this is not our cup of tea. But when people awaken and decide to come out on the road against the government, no power can stop them. Gujarat has shown the way and the youth from all over India will walk that way.”

Mr Thakore, an OBC leader from Gujarat, who won on a Congress ticket, has been consolidating OBC communities in the state for almost two and half years now. He appealed to OBC youth from Maharashtra to join the hands against BJP. “The BJP government is completely anti-people. A few industrialists and Modiji’s coterie are running the country now. We should come together and oppose this way of functioning,” he appealed.

There has been buzz that Mr Thakore, along with youth leaders Jignesh Mewani and Hardik Patel, who had challenged the BJP in Gujarat, would travel to neighbouring states for campaigning against it.