A viral message claims proposed Shivaji statue would be made with same material as solar cells. 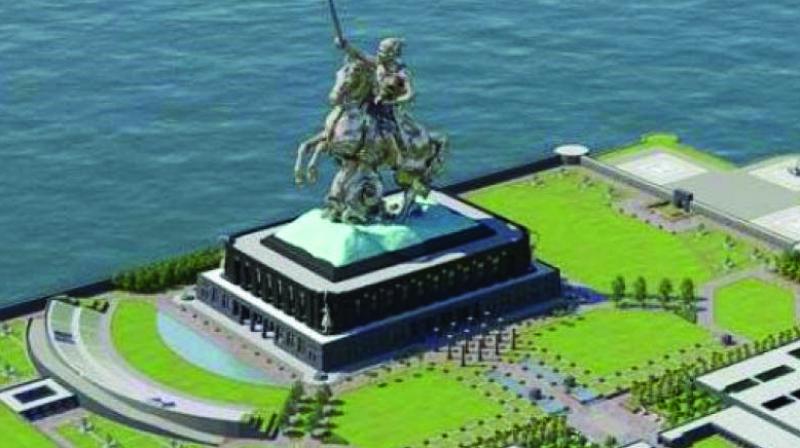 An artist’s representation of the Shivaji memorial.

Mumbai: If you received a message stating that the statue of Shivaji Maharaj in the Arabian Sea will be made of the same matter as solar cells, justifying its Rs 3,600-crore cost, take it with a pinch of salt, since the statue’s sculptor has claimed ignorance about any such material, saying it would be made using bronze.

A message that has been doing the rounds reads: “This is a public service message. Many are cribbing about the cost of the Shivaji statue. What they do not know is this statue is a masterstroke by Modi Sir which will pay for itself many times over.

“The statue is made of Amorphous Silicon, Cadmium Telluride & Copper Indium Gallium Selenide. This is exactly the same material used to make solar cells. Our government consulted with Dr Immonen Kirsi, Senior Solar Scientist at VTT Research, Finland to develop technology to mould these materials into a statue form. This research took 2.5 years & on December 3rd, Dr. Kirsi sent a private email to Modi Sir that it’s now ready for mainstream use. The statue will generate enough electricty to power all government offices in Mumbai. The statue also has Radial Uniform Projection And Ranging(RUPAR) technology to track boats in the Arabian Sea to prevent a repeat of the 2008 Mumbai attack where the terrorists entered India through the sea. RUPAR is the next generation of SONAR technology and has been developed at the Indian Institute of Science. Jai Hind (sic).”

When contacted, the memorial’s sculptor, Anil Sutar, claimed ignorance on use of any such material. “I am not aware of this matter and I don’t have any specification about the material yet. The material that we had thought of using is bronze, which can last for a thousand years. There are a lot of things that need to be considered before we can use the new material — how much wind load the material can sustain, colour of the material, etc. However, I’m sure the government has considered these points. Since there is still some time, if the government wants, we can try using the material. If need be, we can use it at certain portions of the sculpture, like the hoofs of the horse, which can be good enough to generate solar energy. If rightly done, it can be a good idea,” said Mr Sutar.

The rumours were also dismissed by culture minister Vinod Tawde, who has been working closely on the project said. The message appears to be the handiwork of people, who are upset about the government being cornered on the amount of money that is being spent for the memorial.