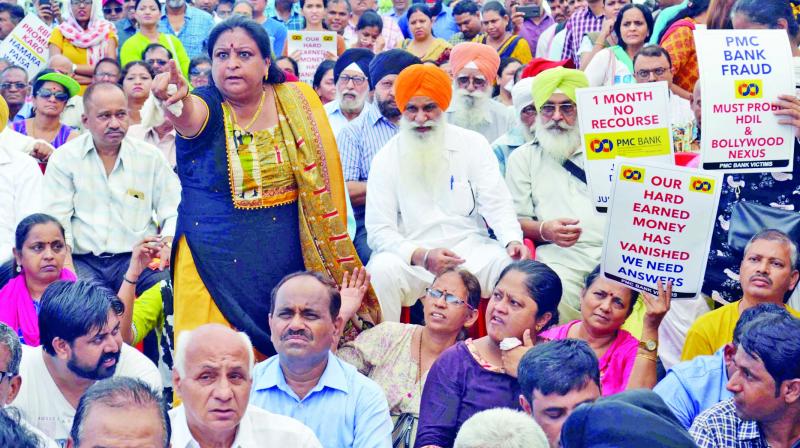 File photo of PMC Bank depositors protesting against its management and the government.

Mumbai: A magistrate court has allowed the administrator of the Punjab & Mah-arashtra Co-operative (PMC) Bank, who is also a representative of the Reserve Bank of India (RBI), to auction two aeroplanes and a yacht belonging to real estate development company Housing Development Infrastructure Ltd (HDIL).

The Enforcement Directorate (ED) had seized various properties of HDIL in connection with PMC Bank scam.

While allowing the sale of properties seized by probe agencies belonging to HDIL group firms and owned by Rakesh Wadhawan and his son Sarang, the additional chief metropolitan magistrate R.K. Rajebhosale took into consideration arguments put forth by the applicant.

The applicant (the RBI-appointed administrator) had contended that due to the restrictions of the RBI depositors could not withdraw more than the amount allowed by the central bank. If this amount were to come into the loan account of the accused by selling the properties, it would be helpful to the account holders to some extent, the applicant contended. It was also suggested that mortgaged and hypothecated assets of the accused were inadequate to satisfy the loan along with due interest.

Considering the ratio laid down by the Supreme Court in a similar case where the apex court had observed that by keeping these properties idle would cause decay on account of weather conditions and it would lose its worthiness, magistrate Rajebhosale allowed the application.

He said that considering the facts and circumstances and ratio laid down by the apex court application filed by the RBI-appointed administrator, the latter is allowed to sell the properties i.e. two aeroplanes — a Falcon 2000 (VT-HDL) and Challenger 300 (VT-PIL) — and a yacht (Ferreti 881 HT) in an auction by following the strict rules and regulations formed for that.

The magistrate also directed that the amount coming from the auction “shall be credited to the loan account of the HDIL and its group companies.”

He directed the administrator to submit a detailed report of the auction and its procedure applied before the court immediately after the sale. The court also asked the EOW, which is probing the case, to make proper panchnama of the properties and submit it before the auction.

The crisis at the bank is attributed to the loans allocated to realty firm HDIL without scrutiny. These loans later turned into non-performing assets (NPAs). In September, the RBI restricted the activities of the bank for six months and asked it not to grant or renew any loans and advances, make any investment or incur any liability.