The department is planning to set up a separate library for some of these old books, which will be open to students. 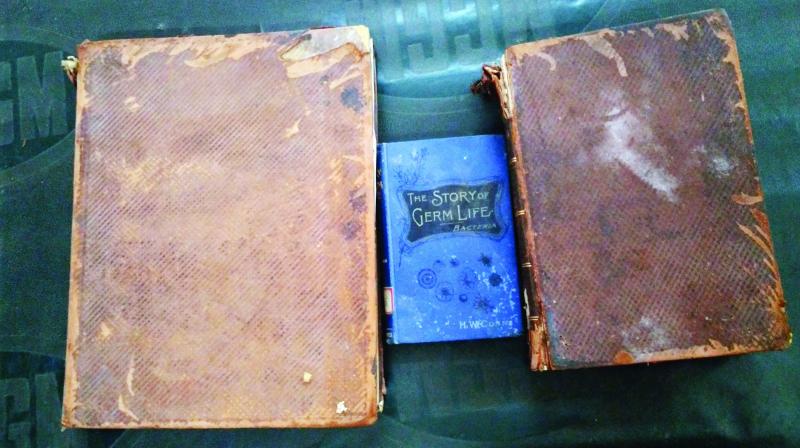 Some of the old books that were discovered.

Mumbai: Around 8,000 old books have been discovered in a library in the 156-year-old Byculla zoo by the Brihanmumbai Municipal Corporation’s (BMC) garden department. Some of these books are around 170 years old, and contain information on botany and zoology.

Civic officials said the books were left by Britishers and some even have recorded details regarding plants and tree species of the zoo at the time it was set up in
1861. The department is planning to set up a separate library for some of these old books, which will be open to students.

The books, divided into three main categories — Botany, Zoology and General — were found when the library was being cleaned and are now being restored.

The oldest book that has been restored so far is ‘Journal of Horticulture and Cottage Gardner,’ which was published in 1848. The Asian Age accessed some of the old books, which include editions which date back to the 1850s like,

‘The Story of Germ Life’ authored by Herbert William in 1859. Most old books were published by the Agri Horticulture Society, which is based in London, a civic official said.

In 1895, the British had granted a large plot of land including the zoo land to the Agri Horticulture Society. “These books will be very useful for students who want to prepare for theses. Some have very detailed information on roses and chrysanthemum. Also some have information on how gardens in the city flourished with time,” added the official.

Jitendra Pardeshi, superintendent of gardens, BMC, said that civic staff have been working for several months in working towards restoring these old books.

“We will create a separate library once the books are sorted with their serial numbers. After getting permissions from the higher BMC authorities, the library will be open for students,” he said.

Civic staff are still in the process of sorting and numbering the books, of which around 7,998 have been discovered. Of these, around only 100 books are recent additions.

Set up for leisure

Ranicha Baug or Veermata Jijabai Bhonsale Udyan (Byculla Zoo) was set up in 1861. The decision to convert the land into botanical garden was taken since it was a useless and low-lying land at that time. Civic officials said that that the garden was created so that the then-British creme de la creme could use it for morning walks. Originally named for Queen Victoria, it is now named after the mother of Shivaji Maharaj.