A civic notice dated October 25 had warned residents to vacate the premises within two days. 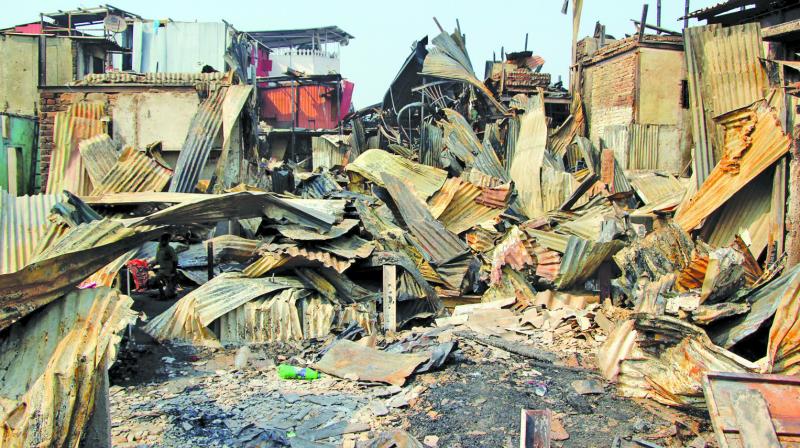 The remnants of the shanties that once stood at Garibnagar, Bandra (east). (Photo: Mrugesh Bandiwadekar)

Mumbai: A blame game between Brihanmumbai Municipal Corporation (BMC) officials and the residents of the Garibnagar slum of Bandra (east) started a day after a huge fire destroyed several shanties in the settlement. Locals have claimed the BMC did not give them enough time to vacate the area prior to the demolition drive during which the fire broke out. A civic notice dated October 25 had warned residents to vacate the premises within two days. But, the BMC started the demolition the very next day. According to locals, a BMC machine hit the gas cylinder, which caused the blast. Civic officials, however, refuted the residents’ allegations, saying that ample time was given to them in the past and the demolition drive against illegal shanties had been going on since 2015.

“We were unprepared when the civic officials came for the demolition work. We thought that two days’ time would be given to vacate,” said Raziya Khan, who has been living in the slum since the past 40 years. Ms Khan used to live in a tin hut, which gutted in the fire on Thursday afternoon. The locals showed this correspondent a notice dated on October 25, which clearly stated that they would be given two days’ time to vacate their houses. “They gave us this notice on the night of October 25,” said Ms Khan.

Stating that the slum dwellers had been given ample time, Alka Sasane, assistant municipal commissioner (AMC), H-East ward, said, “These are illegal shanties and hence we don’t need to send them notices, but we served them anyway. They knew that we would start demolition work immediately,”

Tabassum Shaikh, a resident whose home was gutted in fire, said she would demand a new home. “We have been left with nothing. My children’s books were reduced to ashes. How will he prepare for his exams after Diwali,” she asked.

The blaze, which started around 3.40 pm, turned into a level 4 fire after 4.30 pm, leaving three injured, of which two were firemen.