Three dead in an accident after Raksha Bandhan

2 families met with a bike accident on Sunday evening in Dahanu. 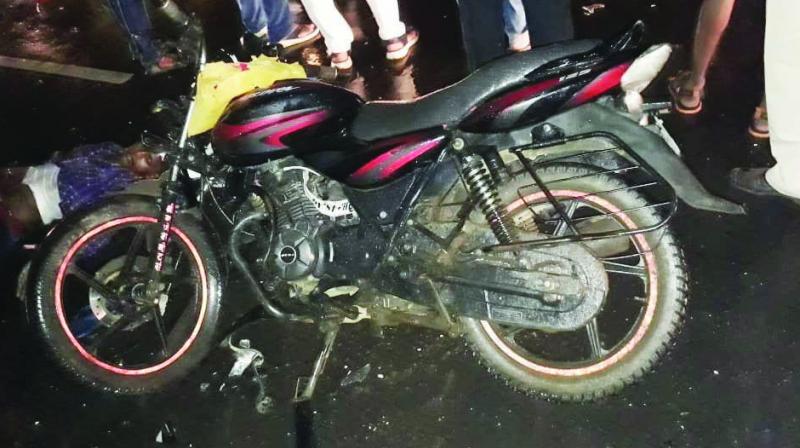 One of the bikes that met with the accident.

Mumbai: While returning post Raksha Bandhan, two families met with a bike accident in which three persons died following a head-on collision on Sunday evening near Charoti Naka in Dahanu. Two kids from both families that met with the accident have survived and are undergoing treatment in hospital. The Kasa police station has registered a case of rash driving and death due to negligence against the accused biker.

The deceased were identified as Swapnil Shingda (28), his wife Sharmila (25) and Manoj Guhe (28). The Shingda couple was travelling on a bike with their 3-year-old son Aarush, who survived the accident. Guhe’s 4-year-old daughter Manavi, however, has sustained serious injuries and has been shifted to Silvasa for further treatment, Palghar police said.

Investigations revealed that Shingda family, who resided at Urse in Dahanu Taluka, was returning from neighbouring state after celebrating Raksha Bandhan when they met with an accident.

“Guhe was riding towards Kasa from Dahanu on Shine motorcycle, when he rammed head-on into Discover bike that was occupied by Shingda family. Guhe was riding rashly that led to the accident and hence a case has been registered against him,” said Hemant Katkar, Palghar police spokesperson.

The case was registered based on eyewitness accounts who informed the police and rushed the injured to hospital. The police are now investigating the matter further to ascertain more details and will record statements of the passers-by and scan the CCTV camera footage of the spot.

A case has been registered against Guhe under sections 304 (A) (death due to negligence), 279 (rash driving), 338 (causing grevious hurt) of the Indian Penal Code along with sections of the Motor Vehicle Act.