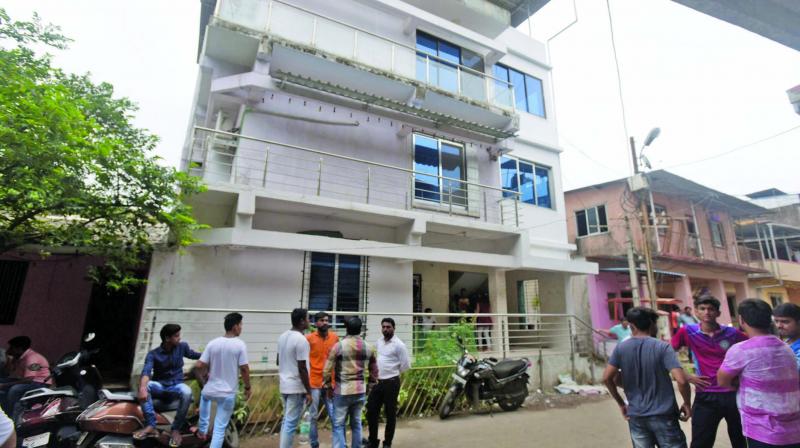 ATS had earlier conducted raids, seized explosives and arrested Raut, Kalaskar, Gondhalekar and Pangarkar. Avinash Pawar (inset) was arrested on Friday, after he was found to be in constant contact with the earlier arrested accused.

Mumbai: The state anti-terrorism squad (ATS) has found that the recently arrested accused in a right-wing terror case was associated with controversial outfit Shiv Pratishthan of Sambhaji Bhide. The accused Avinash Pawar worked at Mazgaon Docks and was arrested after he was found to be in constant contact with the earlier arrested accused.

Officials said that the accused was also active in Bhide’s right-wing organisation and was allegedly one of their trusted operatives in Mumbai. Pawar’s activities are now under the scanner after he was found to be in close contact with the accused, apprehended with crude bombs and firearms.

“While we are in the process of ascertaining the purpose of his close contact with Vaibhav Raut and his cronies, other details pertaining to his connection with Bhide’s outfit at the organisational level will now be looked into,” said an officer.

Raut is associated with the Govansh Raksha Samiti and was a gau rakshak who was on the externment list of the local police. The ATS had searched his Nalasopara residence in the early hours of August 11 and found crude bombs and a cache of firearms.

It was later established that his associates and other arrested accused in the case Sharad Kalaskar and Sachin Andhure had killed rationalist Naren-dra Dabholkar in August 2013.

Raut arranged the firearm and he was also part of a conspiracy that was allegedly hatched by Dr Virendrasinh Tawade and several right-wing outfits, officials said. The investigators added that they would try to ascertain if Pawar was part of the conspiracy that led to the murder of Dabholkar and other rationalists.

The Central Bureau of Investigation (CBI), which has custody of Sachin Andhure, the second shooter who allegedly accompanied Kalaskar to kill Dabholkar, informed Pune court on Sunday that the weapon used for murdering the rationalist and Bangalore-based journalist Gauri Lankesh was the same.

Pawar was arrested by a team of ATS from the docks and was produced before the sessions court on Saturday morning.

The ATS has sent two of his mobile phones for forensic analysis. The ATS will look into his call records and texts or data, exchanged with the previously arrested accused persons.

The ATS has arrested Raut, Kalaskar, Sudhanva Gondhalekar and Shrik-ant Pangarkar (former Shiv Sena corporator from Jalna) in connection with the terror case.

The ATS later seized a large cache of firearms and 20 crude bombs along with semi-complete fire-arms and material used to make bombs from residences of Raut in Nalasopara and Gongha-lekar in Pune.