Efforts on to save collapse victims 24 hours later

The rescue operation was on even as fire brigade personnel were facing difficulties in removing the debris. 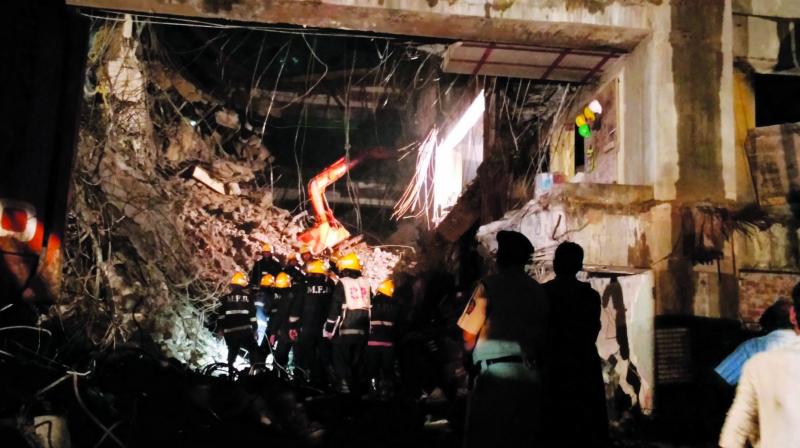 One person was killed in the Chandivali building collapse on Saturday.

Mumbai: The rescue operation to save six persons suspected to be trapped inside the debris of a six-storey building at Chandivali that collapsed on Saturday evening continued on Sunday. On Saturday, the middle portion of the building had collapsed at a time demolition work was on. Three people were rescued initially, out of which one later died before he could be admitted to a hospital. The rescue operation was on even as fire brigade personnel were facing difficulties in removing the debris.

“It’s a standing structure and the slab broke off from the middle portion. Due to space constraints and safety issues, the rescue operation is taking time,” said P.S. Rahangdale, civic fire chief.

When The Asian Age visited the site on Sunday evening, workers employed by a contractor to remove the debris said that only 30 per cent debris had been removed till then. “We are now in the process of cutting rods, which are precariously coming in the way, so that more space will be available for the vehicles to remove the debris,” said one of the workers involved in removing the debris.

Some of the workers present at the site said that sniffer dogs of the National Disaster Response Force (NDRF) were brought to the place on Sunday morning and had pointed six places where workers could be trapped. However the debris-removing machine has not been able to reach the spot so far.

Adding to the woes of the rescue personnel, the machines that were being used to remove the debris stopped working, leading to delay of an hour in the operation. “The situation is very precarious, it seems like the whole building can fall any time,” said a member of the NDRF present at the site.